'Dancing with the Stars' scares up 3 perfect scores, 1 elimination 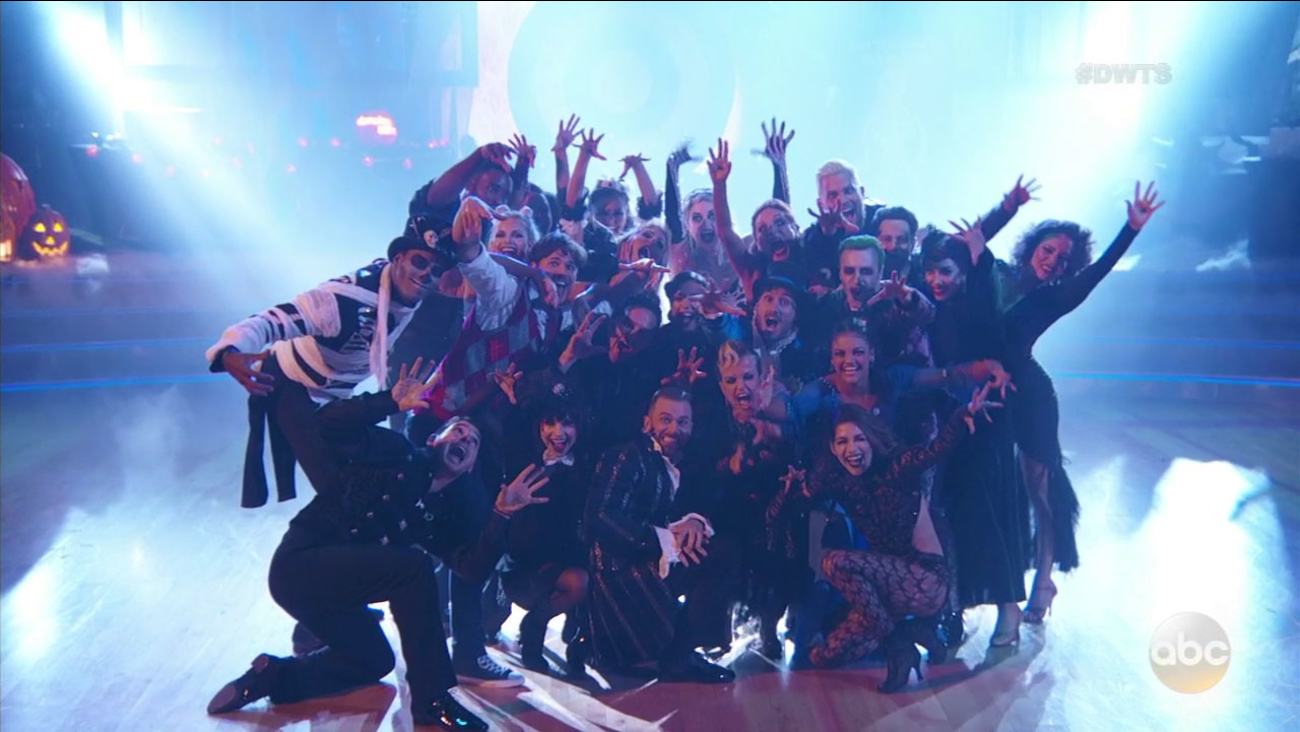 Things got a little scary on "Dancing with the Stars" this week.

You know you're in for a good time when "Dancing with the Stars" kicks off with the classic Oingo Boingo Halloween song "Dead Man's Party."

Over-the-top costumes? Check! Spooky effects? Check! Creepy lighting? Check! And the scare factor for the dancers is doubled this week.

For the first round of the competition, each of the seven remaining couples performed an individual Halloween-themed routine. The highest-scoring couple from the first round received immunity. But guess what? There was a three way tie for first place! A trio of perfect scores!

Host Tom Bergeron goes to the magic DWTS rule book and tells us the star who gets immunity is the one with the highest cumulative score over the season. That means you, James Hinchcliffe! The other two couples with perfect scores, along with the other four pairs, went head-to-head in a dance-off that could treat them to extra points.

Here's a rundown of the night's dances, from highest score to lowest:

James Hinchcliffe- 30 out of 30; 5 bonus points for winning the round
James has been a frontrunner but a big question mark surrounded his performance this week because his pro partner Sharna Burgess tweaked her knee. The injury happened last week in dress rehearsal and Sharna said it was just a "fluke accident." But she knows she needs to think long-term and be extra careful so she sat out this week on the dance floor and recruited Jenna Johnson to fill in for her. Sharna did the choreography and concept, and James just had to act like a pro dancer himself and hit the ballroom with someone new. And of course once again he hit it out of the park.

James as The Joker and Jenna as Harley Quinn with a fun and funky Viennese waltz had everyone on their feet. Well, everyone except Judge Julianne Hough, who needed to fan herself after the hot number. Hough told James he's the real deal; and Carrie Ann Inaba said while it hurt her heart to see Sharna up in the balcony, she thought James handled the situation like the pro he is. (And then she said James reminded her of Mark Ballas!)

Laurie Hernandez - 30 out of 30; 3 bonus points for winning her dance-off
Laurie's pro partner, Val Chmerkovskiy, was beginning to question his own creativity because the couple had begun to backslide after their perfect score a few weeks ago. Choreographing a Viennese waltz to "Pure Imagination" from "Willie Wonka and the Chocolate Factory" tapped into a wellspring of emotions for Val. The way he sees Laurie and her youth and innocence really touches him.

And given their return to the realm of the perfect score, it also touched a chord with the judges. Carrie Ann was brought to tears, and thought the couple connected everyone in the ballroom together in one magical moment; Julienne thanked the duo for helping to let us all feel like kids again, even for a brief minute and a half; and Bruno Tonioli praised Laurie for improving her acting skills to reach the level of her dancing abilities.

Calvin Johnson Jr. - 30 out of 30
The football great was tied for first last week but this guy does not rest on his laurels. He knows he and Lindsay Arnold have to work twice as hard to keep their momentum going. The duo performs a quickstep (as skeletons) and use every inch of that ballroom dance floor. Julianne loved the way they captured the theme of the dance without compromising the integrity of the dance; Bruno praised the balance of the routine's content; and Carrie Ann thinks Calvin has a lot in common with former DWTS champ Emmitt Smith.

Jana Kramer - 27 out of 30; 3 bonus points for winning her dance-off
Here's something that could throw any celebrity for a loop on DWTS: your pro partner tells you at rehearsal that he's NEVER done the style of dance that you've been assigned. But Jana took it in stride and had full confidence in Gleb Savchenko (who will now be known as her little Russian bear). The couple does a jazz routine to "Little Shop of Horrors" and you'd never know he was a rookie. Carrie Ann called it refreshing and bright; Julianne thought it looked like it came right off of Broadway; and Bruno loved the high energy and sparkle and complimented Jana on being very "bendy" (we saw lots of flips and splits).

Terra Jole - 24 out of 30
Terra is over-the-moon excited to be able to dance to "Day-O" by Harry Belafonte. She is a huge fan of "Beetlejuice" and they take that theme and run with it. Sasha Farber is trying to get her to focus more on her technique, but Terra is embracing Halloween and she spends the week playing pranks and trying to scare her partner. They were the first couple to dance, and Julianne thought they totally set the mood and tone for this Halloween themed week; but both Julianne and Carrie Ann think Terra can push herself just a little bit more. Carrie Ann says she wants to be surprised!

Ryan Lochte - 23 out of 30; 3 bonus points for winning his dance-off
Ryan's partner Cheryl Burke really cracked the whip this week. She felt she needed to take a new approach in rehearsals and really get Ryan to kick things up a couple of notches: she actually called it "Cheryl's House of Pain!" The Olympian had no problem listening to his coach/drill sergeant and felt like he would have a breakthrough. He also praised Cheryl, saying "Even when I suck, she's got my back." The judges all agreed that the performance level was much, much higher this week but there were still several problems with technique.

Marilu Henner - 23 out of 30
Marilu says she's not only feeling the physical strains of this tough competition but also the emotional ones. She knows by the past few weeks' scores that she's an underdog; plus, she has a painful heel injury. Marilu is doubting herself a lot. Derek Hough tries to encourage her during the rehearsals for their Argentine tango but in the ballroom there are a couple instances where you can tell she got inside her own head. Carrie Ann praised her for coming back with such intensity but did call out the missteps; both Julianne and Bruno told her to trust herself AND her partner.

Since James had immunity, the next in line with cumulative scores was Laurie. She chose to face her toughest competitor, Calvin, and they did the jive. The judges thought both couples were strong and clean, but in the end, chose Laurie. America also had a vote in this (well, the America that is the East and Central time zones anyway) and they also decided to give Laurie the bonus.

Next in line is Jana, who selected Terra for a salsa dance-off. The judges thought both women pulled out all the stops and their votes were divided. America went with Jana, so she gets an extra three points.

Lastly, Marilu and Ryan go head to head with the cha cha. Again, the vote with the judges was split but America went with the Olympian and Ryan gets to add three points to his total. Is it enough to keep him here for another week?

Nope. Ryan and Cheryl are the latest eliminated couple.