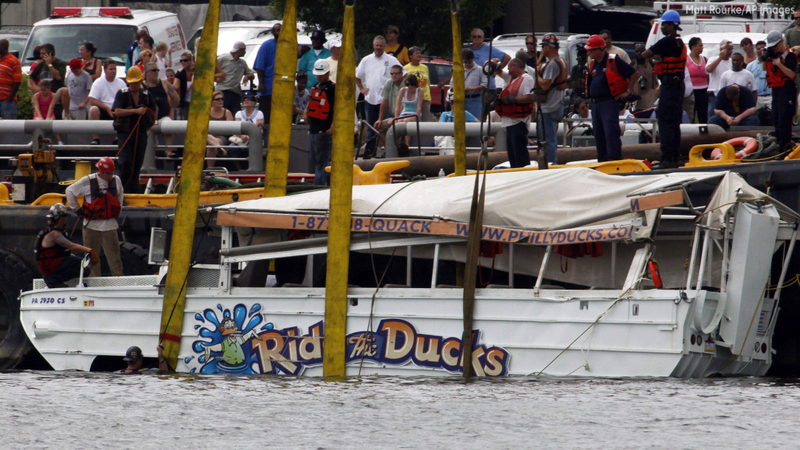 Seventeen people were killed and several others injured when a tourist duck boat capsized on a lake near Branson, Missouri on Thursday evening.

The incident is the latest of several deadly accidents in the past two decades involving the amphibious vehicles.

What are duck boats?

Duck boats, also known as DUKW vehicles, are built with wheels so they can navigate water and land. They were popularized as landing vessels in World War II. Today duck boats are mainly used for sightseeing.

Here's a look back at deadly incidents involving duck boats through the years.

Thirteen people died when a duck boat sank to the bottom of Lake Hamilton.

An NTSB investigation concluded that inadequate maintenance caused the vessel to sink. The boat took on water due to a loose rubber boot and began to sink.

Seven passengers and the operator of the boat managed to escape.

Two tourists were killed when a tugboat-guided barge struck a Ride The Ducks boat on the Delaware River. The duck boat sank after being struck by the barge.

The driver of the tugboat that was guiding the barge was charged with manslaughter after it was determined he had been distracted by his laptop and cellphone "for an extended period of time prior to the collision."

The tourists who died were Hungarian students visiting the U.S. on a church exchange. The families of the victims won a $17 million settlement.

A duck boat driving on the street struck and killed pedestrian Elizabeth Karnicki of Beaumont, Texas. At the time Ride the Ducks, the company that operates the vehicles, said that no citation was issued "and the police indicated Ride The Ducks was not at fault."

Lawyer Robert Mongeluzz, who represented families of victims for both Philadelphia crashes, said on Friday that he believes duck boats should be banned.

"This has happened repeatedly. I watched the video last night. They ride low in the water. The boat capsized and, quite frankly, they should be banned," he said of the Missouri accident in a phone interview with 6abc Action News. "This is not something we are just saying now."

Five college students were killed when a duck boat collided with a bus. The driver of the duck boat said he lost control of the vehicle before it veered into oncoming traffic on the Aurora Bridge, according to the NTSB report.

Allison Warmuth, who was riding a scooter, was struck and killed by a duck boat. One of the stipulations of a 2016 settlement was that the driver would not be permitted to operate a duck boat for that tour company again.

July 19, 2018: Branson, Missouri
Thursday's accident on Table Rock Lake left 17 dead. The Missouri Highway Patrol confirmed that children were among the dead. There were 31 people on board, according to ABC News.

"We are deeply saddened by the tragic accident," Suzanne Smagala-Potts of Ride the Ducks Branson, the company involved in the accident, said in a statement.

"This incident has deeply affected all of us," Smagala-Potts said. "We will continue to do all we can to assist the families who were involved and the authorities as they continue with the search and rescue. The safety of our guests and employees is our number one priority."