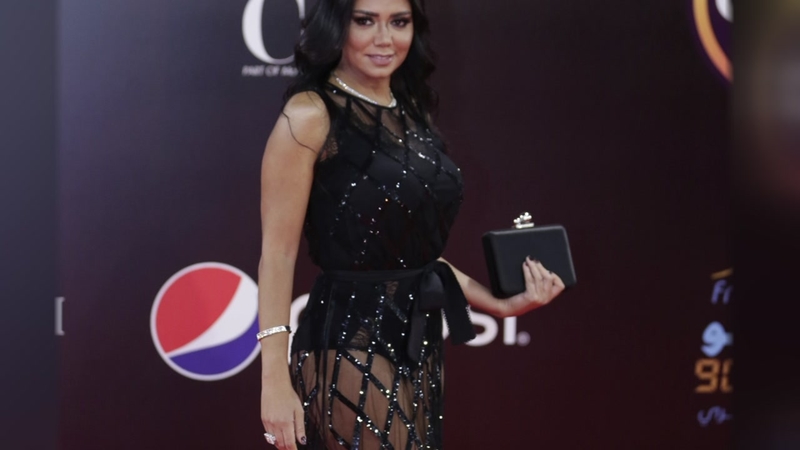 CAIRO -- It's a dress that has shaken Egypt and the uproar continues - prosecutors on Wednesday questioned actress Rania Youssef for at least four hours on accusations of public obscenity over a revealing dress she wore to a cinema gala last week, her lawyer said.

Youssef was allowed to go free after the questioning, pending the completion of the investigation, said the lawyer, Shaban Said.

But he added that she still faces trial on Jan. 12, a date set by court, and could possibly face up to five years in prison, if convicted.

The initial complaint against the 45-year-old Youssef was filed by a group of lawyers with a reputation for moral vigilantism but they said they withdrew their complaint on Tuesday.

Though she stopped short of an outright apology, Youssef said she did not mean to offend anyone with her long black dress, its see-through skirt revealing her legs in their entirety. She wore the dress last Thursday for the closing ceremony of this year's Cairo International Film Festival.

Images of Youssef in the dress were widely shared on social media in Muslim-majority Egypt, where ostensibly secular authorities often side with religious conservatives.

Her case prompted the country's Actors Guild to declare it intended to investigate and discipline actors who wore "inappropriate" attire during the opening and closing ceremonies of the weeklong film festival, arguing that they clashed with "traditions, values and ethics of the society."

Youssef said in a Facebook post that she may have misjudged how people would react to the dress.

"If I had known, I would not have worn this dress," she said. "I want to repeat my commitment to the values and ethics we have been raised by in Egyptian society."
Report a correction or typo
Related topics:
style & fashiondress codedressesu.s. & worldgala
Copyright © 2022 by The Associated Press. All Rights Reserved.
TOP STORIES
Deputies shoot person of interest in Cracker Barrel shooting
Man died after going back inside burning house in N. Houston
Employee fatally shot at Cracker Barrel leaves family proud
Juveniles injured in SE Houston shooting, suspects detained, HPD says
Man shot by possible family member in north Harris Co., sheriff says
Robbery victim's dad blames lack of parenting for young suspects
HISD to stay closed through Tuesday due to rise in COVID cases
Show More
Tips for managing your finances during inflation
Baby found inside apartment after deadly double shooting in N. Houston
Conroe man accused of scamming $600K from elderly victims
What happened to water levels on Clear Lake this weekend?
Big warm-up before a midweek cold front
More TOP STORIES News