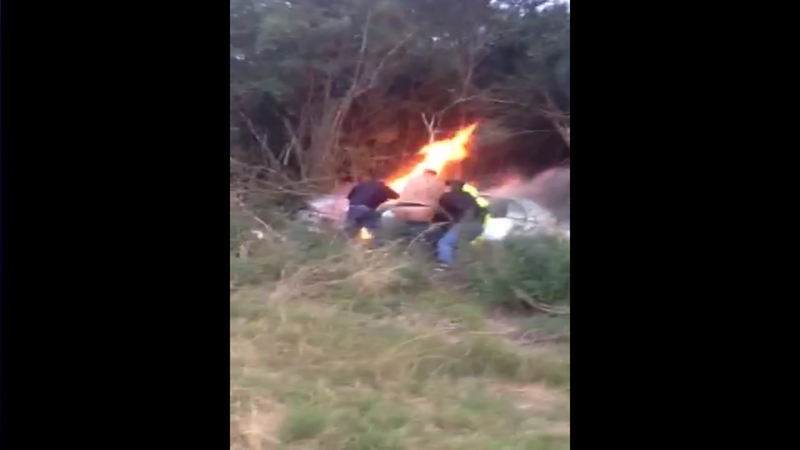 PEARLAND (KTRK) -- A man's car veered off the road Sunday morning and the driver was rescued by strangers just seconds before it burst into flames in Pearland.

It happened on Highway 288 between County Road 59 and the 518 Pearland exit. An ABC13 viewer sent in video capturing the man being rescued.

One of the videos of person being pulled from a burning car in Pearland.

Officer Jason Wells with the Pearland Police Department said when his officers arrived, the man was already out of the car and the vehicle was scorched.

"It was even potentially dangerous for the [rescuers] to jump in but they did and moved that driver to safety," Wells said.

It's not clear who some of these rescuers are because they left before law enforcement showed up. The driver appeared to have broken bones, according to police. He's being treated at Houston hospital.

The outcome could have been much worse if it weren't for strangers willing to put themselves at risk, Wells said.

"Without these folks helping the driver at that time, it could have been catastrophic," he said.

Don't feel like you should rush into danger without being certain you can help, Wells said. Sometimes people with good intentions end up putting themselves in danger giving emergency crews more people who need saving, he said.

One of the videos of a person being pulled from a burning car in Pearland.

"Let your conscience be your guide on whether you think you're going to make situation better or potentially worse."