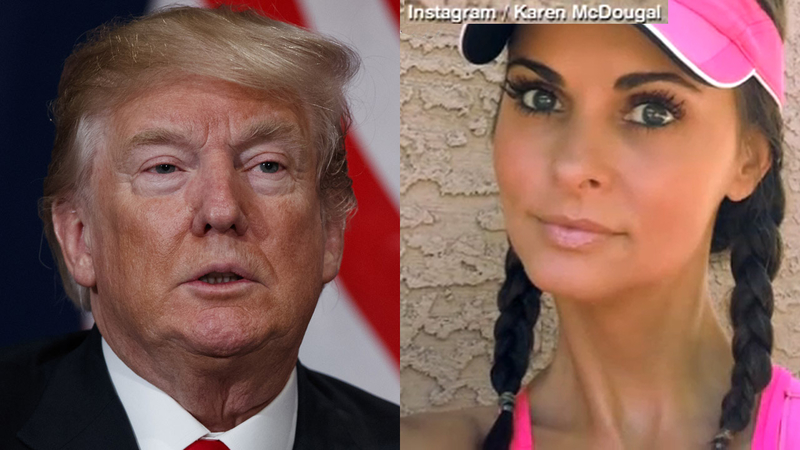 The New Yorker published handwritten notes from Karen McDougal, reporting that the National Enquirer bought the excusive rights to her story but never published it.

The tabloid reportedly paid $150,000 for her account of the affair, which allegedly began less than two years after he married his current wife Melania and after son Barron was born.

The Enquirer claimed it didn't find the details "credible," but the deal prevented McDougal from telling her story elsewhere. But now, the New Yorker reported it obtained an eight-page document from one of McDougal's friends detailing the alleged affair. McDougal confirmed it to be written in her own handwriting.

They allegedly met at a party in June 2006 at Playboy mansion after Trump taped an episode of his reality show "The Apprentice" there. McDougal reportedly wrote that Trump "immediately took a liking to me, kept talking to me, telling me how beautiful I was."

According to the New Yorker, in the document, McDougal describes their first date as dinner in a private bungalow at the Beverly Hills Hotel, where they allegedly had sex.

Afterward, she reportedly wrote she "went to see him every time he was in LA (which was a lot)," and that he hid the fact that he paid for her travel "every time I flew to meet him, I booked/paid for flight + hotel + he reimbursed me."

She reportedly wrote that an affair between Trump and adult film actress Stormy Daniels, which he has denied, began while he and McDougal were together as well.

According to the New Yorker, McDougal's alleged affair with Trump lasted for nine months, with McDougal reportedly writing she ended the relationship in April 2007.