We have a winner! Dickinson names new mayor in ping pong ball draw 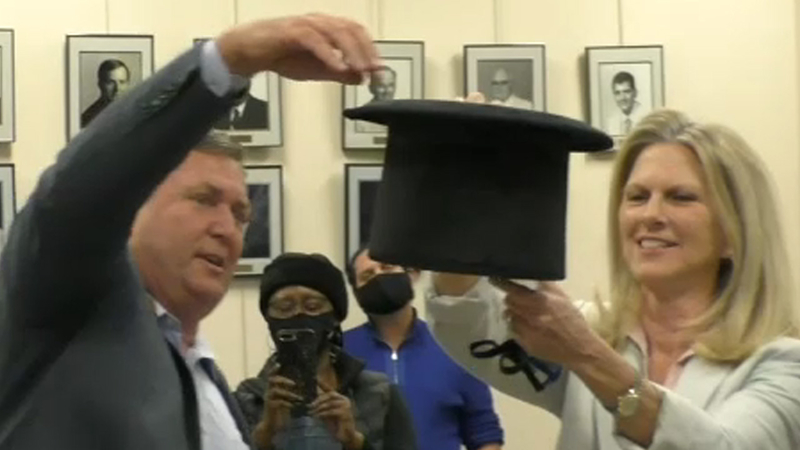 DICKINSON, Texas (KTRK) -- After a runoff resulted in a tie, the city of Dickinson was forced to elect its newest mayor by pulling a name out of a hat.

"I'm overwhelmed," said Skipworth shortly after the drawing. "This has been such a long campaign, and for it to end like this, I'm kind of numb."

Relive the moment in the video above!

Skipworth and his opponent Jennifer Lawrence have campaigned to be the city's mayor for nearly a year. The election was supposed to take place in May, but due to COVID-19 concerns, it was delayed until November. During the general election, neither candidate received 50% of the vote, which triggered a runoff.

Then, last month, the runoff recount resulted in a vote total that left the candidates speechless.

READ MORE: Dickinson's new mayor to be pulled out of a hat
EMBED More News Videos

The candidates said Dickinson's charter didn't have plan for a tie, and because of this, state law triggers a casting of lots to decide the winner.

"I mean you can't make this up, nobody would believe it if you put it on TV or something, I mean, it's just unreal," said Skipworth.

He said one of the first items on his list when he's sworn in is to recruit a permanent city manager and look ahead to the next legislative session and examine any sales tax changes that could impact the city of Dickinson.

"I'm just thankful to everybody that came out to vote, because literally, your vote counted and we wouldn't be here without you," he said.

To make sure there's no bias in whoever picks the name out of the hat, the city invited Friendswood's mayor, Mike Foreman, to conduct the drawing.

"I just want to thank these candidates for stepping up," said Foreman. "We need people like them to step up and run for election in these small towns."

Meanwhile, Lawrence said she trusted the process and believed the drawing "went how it was supposed to go."

"I've had dozens and dozens of people praying about this," she said. "I told Sean I would support him, and I will, and I think unity is the way to go to get stuff done."

Skipworth is slated to be sworn in next week.