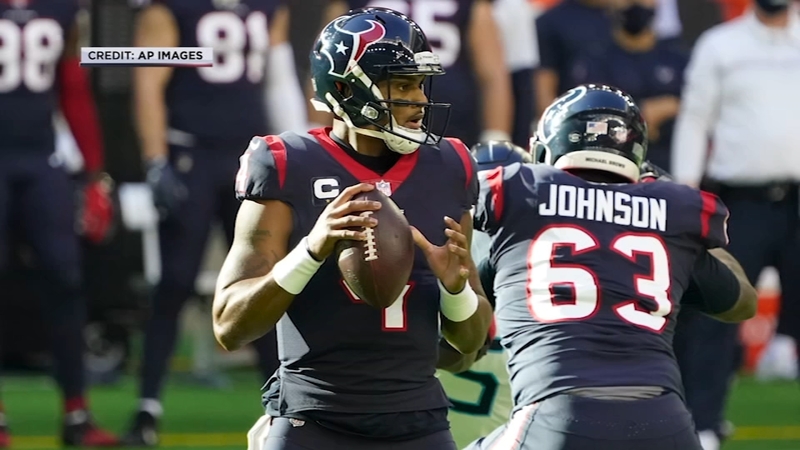 Houston lawyer Tony Buzbee has filed 19 civil lawsuits against Watson on behalf of women who allege inappropriate behavior and sexual assault during massage sessions with the Texans quarterback. Three of the lawsuits filed Sunday night accuse Watson of "purposely" touching the women with his penis and state that his "behavior is part of a disturbing pattern."

"We're certainly cognizant and aware," Caserio told the Texans All Access podcast. "We made a statement at the beginning about where the organization stood. I would say it's a legal situation, it's a legal process, so we're certainly respectful of that.

"We certainly take them very seriously. The allegations, what's been discussed, are certainly troubling. And organizationally that's not something that we can condone, that we condone, those types of actions."

Caserio's comments on Watson's situation are the first by a member of the team. Head coach David Culley has not spoken to the media since the first lawsuit was filed March 16. The team has released two statements and said in one they would stay in close contact with the NFL during its investigation under the league's personal conduct policy.

SEE ALSO: Deshaun Watson's lawyer denies Texans QB is reaching out to women accusing him
Hardin also said in a statement last week that his law firm has "strong evidence" showing that one of the lawsuits alleging sexual assault is false and that it "calls into question the legitimacy of the other cases as well."

Buzbee said earlier this month that he would submit affidavits and evidence from several women to the Houston Police Department and the Harris County district attorney. Buzbee also said he will request that a grand jury consider the evidence and determine whether charges should be brought against Watson by the state of Texas.

Dane Schiller, a spokesperson for the Harris County district attorney, said last week that it would be "inappropriate" for the DA's office to comment on the lawsuits against Watson.

"It would be inappropriate for the District Attorney's Office to comment on a civil lawsuit, and we refrain from publicly discussing allegations in any matter until and if a criminal charge is filed; we do this out of fairness to all," Schiller said in a statement.
Report a correction or typo
Related topics:
sportshoustonsexual misconductespnlawsuithouston texanssexual harassmentsexual assault
Copyright © 2021 ESPN Internet Ventures. All rights reserved.
LAWSUIT
$10M lawsuit filed accuses Houston-area priest of sex assault
NYC couple sues Peloton after 4-year-old pinned by treadmill
35 more families suing after Splashtown chemical spill
Lawsuit against Splashtown emerges as health issues linger
TOP STORIES
Couple robbed while unloading from trip, HPD says
EMT inside hijacked Houston FD ambulance hailed as a hero
Child fighting to survive crash that may have involved street racer
'Do your job': Murder victim's brother waiting for trial tells courts
Pattern change this weekend brings less rain, more dust and heat
No more balloon releases in Galveston? City considering a ban
Morgan Wallen speaks out on using a racial slur in 'GMA' interview
Show More
1 dead, 5 hurt in shooting at N. Houston bar
99.5% of Texans who died from COVID since Feb. were unvaccinated
Texas and Oklahoma could move to SEC in weeks, sources say
Pearland alcohol petition drive needed 15K signatures, and it got 18K
AL governor: 'Start blaming the unvaccinated' for rising COVID cases
More TOP STORIES News