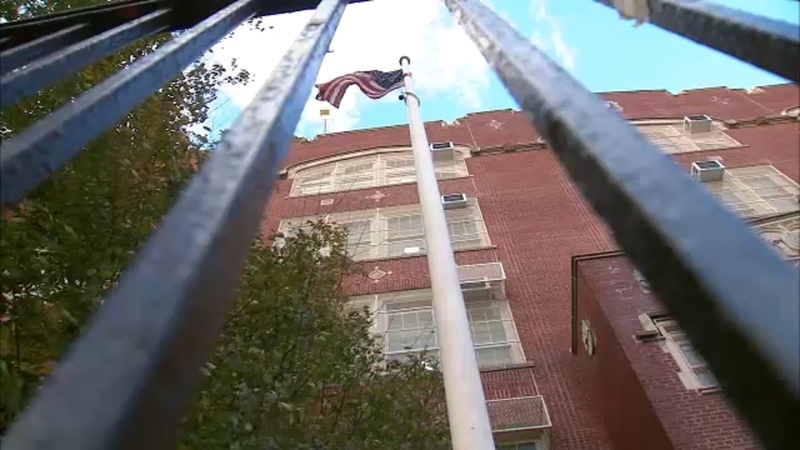 BROWNSVILLE, Brooklyn -- The mother of a 7-year-old boy who says he was dragged out of class by his second-grade teacher has filed a claim against New York City and specifically the Department of Education for negligence, carelessness and recklessness.

The complaint filed Tuesday by an attorney for Britney Graham accuses Riverdale Avenue Community School in Brownsville of failing to provide adequate supervision and care for the safety of children at the school.

Graham says her son's second-grade teacher dragged him by his shirt out of class, exposing his chest to his classmates, when he failed to follow directions and sit on "the rug" for story time.

"He doesn't get touched at home," Graham said. "So for someone to touch him, it's like, what in the world is going on?"

Graham said she initially reached out to the school principal before filing a formal complaint with the Department of Education.

A co-teacher in the classroom at the time of the incident also filed a complaint regarding the treatment he observed of Graham's son.

District policy prohibits teachers from, "any act of physical force upon a pupil for the purpose" of punishment except to protect oneself or others from physical injury.

"I was beyond shocked that this happened," said the co-teacher, who asked to remain anonymous for fear of retaliation. "He was just dragged like a carpet with his stomach being exposed in front of his other peers. There wasn't any procedure followed like speaking with him or what I would consider other more humane responses to such a situation."

The co-teacher also recorded a conversation in which he confronted his co-worker about her behavior, and she appeared to admit her mistake.

"I perhaps should not have attempted to physically remove him from the class," she is heard saying in the recording. "Maybe that's not what I should have done, but I didn't know what to do."

DOE opened an investigation, but Graham says Riverdale's principal did not remove her son from the classroom or the care of the teacher accused of misconduct while that investigation was pending.

Frustrated, Graham transferred her son to a new school.

Then, more than a month after the incident, Graham followed up by email and was informed the investigation revealed the allegations were unsubstantiated and the case was closed.

"We take these allegations seriously, and this matter was unsubstantiated after a thorough investigation," DOE spokesman Doug Cohen said in a written statement. "Riverdale Avenue Community School has a strong culture of trust among teachers, administrators, and parents. We'll review the lawsuit."

"I'm upset, I'm disgusted with the school," Graham said. "I know what happened, but you (DOE) are trying to cover it up like it didn't happen. No one is doing nothing about it, and it's crazy."

Graham responded Tuesday by filing a notice of claim against the city.

She says the experience has left her son fearful of teachers and scared to attend school.

Graham said she also questions how many other students have had similar experiences at the hands of teachers.

"I'm a mother at the end of the day," she said. "They couldn't protect my son, but maybe if the world sees or other people see, maybe some other people's kid will speak up. And maybe it won't take as long as it took for my son for someone to say, 'OK, this did happen.'"

The NYPD and the Administration for Children's Services were also notified and have opened separate investigations into what happened.

A spokesperson with the Department of Education said the teacher accused of misconduct had no prior disciplinary history and did have a disciplinary meeting about her behavior.

Meanwhile, the teacher who reported the incident was removed from the classroom after reporting his co-worker for possible misconduct. He is now facing possible termination.