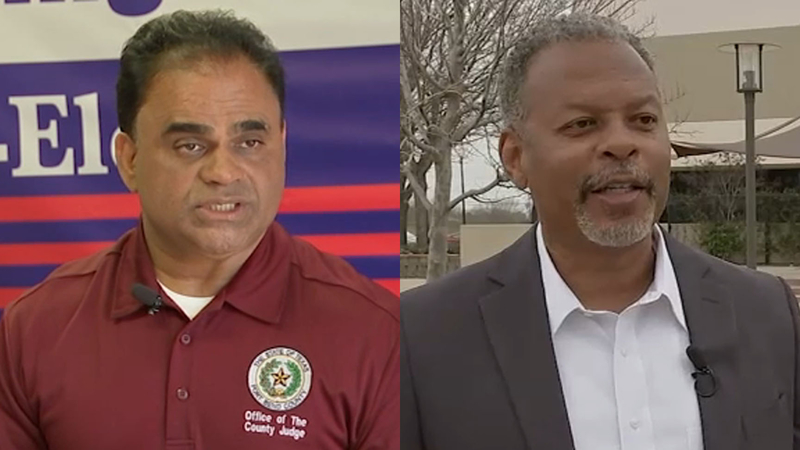 FORT BEND COUNTY, Texas (KTRK) -- In Fort Bend County, every county-wide position is held by a Democrat. Tuesday's primary could turn out to be more consequential than November's election.

There are two men on the ballot, and both of them are minorities. Democrats choose between a popular incumbent, KP George, and Ferrel Bonner. Bonner is not a newcomer to local politics, but he's asking Fort Bend voters to take a chance as the challenger.

For many active Democratic voters in Fort Bend County, Bonner is familiar. He has served in the United States Army and at several levels in the local party. He said the response to the winter freeze and the pandemic made him realize that he has the emergency management and disaster response skills needed for the county's top job.

"In these types of positions, you're supposed to have foresight and forethought and prepare for these types of things. When I saw how slow we were doing things, I realized we had a problem. We need someone with practical experience, 15 years plus, to come out here and help this county," Bonner said.

Bonner's other priorities include education and teacher pay, healthcare, security, and quality of life. Those issues are also part of incumbent George's platform.

"We have a long way to go, and we want to continue that a second term and beyond," said George.

RELATED: Election officials show ABC13 what happens before and after you cast your vote

"My goal is to create stability, and that is what I did," said George. "Fort Bend is stable, and I am very proud to stay that."

With a population projected to hit one million by 2027, both candidates are also focused on uniting one of the country's most diverse counties.

"We have an opportunity to set the standard for the rest of the country. How can we live in harmony and live together without looking at each other as aliens? We are people. We are human beings," George said.

"I'm not a partisan figure, per se, because when it comes to taking care of people in this county, there are no Democrats, Republicans, or Independents," Bonner said. "I represent everyone, and that good faith in itself will take this county a long way."

With similar politics and priorities, the difference between the two candidates comes down to leadership styles.

"Let's sit down and talk about how you're going to move Fort Bend forward to the benefit of our citizens. Let's debate. Let's talk about it," George said.

"What makes me different, number one, is that I've led at every level of government. I'm able to go in any part of this county and be functional and not be afraid and get along with everybody," Bonner said.

George has the distinction of being the first South Asian county judge. Bonner would like to become the first African-American to hold the position.

The candidates are two men with one similar vision to move Fort Bend County forward, and they're both asking voters for that opportunity.

On the Republican side, there are two men on the ballot running for Fort Bend County Judge. Trever Nehls declined to give an interview before the primary. Ibifrisolam Max-Alalibo did not respond to repeated requests for an interview.