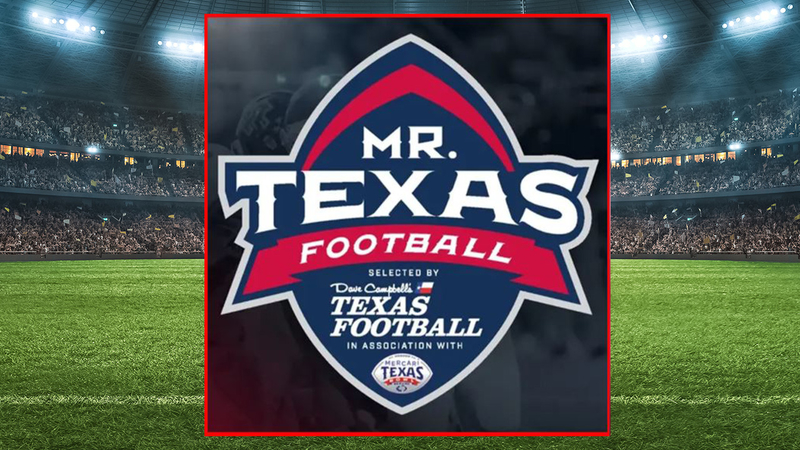 HOUSTON, Texas (KTRK) -- In a state that eats, sleep, and breathes football, the fans here call on one man who has all the answers.

For more than 60 years, Dave Campbell's Texas Football has been referred to as "the Bible" of Texas football across the Lone Star State, covering from the lowest division in high school football to the Dallas Cowboys and Houston Texans.

As the end of the regular season approaches and most Texas high school football teams are making their run for a state title, Dave Campbell's Texas Football and the Mercari Texas Bowl are announcing the 10 finalists for the Mr. Texas Football High School Player of the Year Award. Former winners include (2012) Heisman Trophy winner Johnny "Football" Manziel, and (2014-15) Gatorade National Football Athlete of the Year, (2018) Heisman Trophy winner, (2019) No. 1 Overall pick Kyler Murray.

This year's finalists include three within the Greater Houston metroplex.


Weigman is a four-star quarterback at Bridgeland High school, highly recruited with a list of offers ranging from Arkansas to Florida University. This season, the star quarterback has thrown for over 2,000 yards, 28 touchdowns, and five interceptions, according to Horns247 and 247 Sports.

Davis needs no introduction as he and his stampede of mustangs at North Shore High School are en route to a third straight Texas High School Football championship.

This season, the champ has thrown for more than 2,000 yards, 30 touchdowns and one interception. He has rushed for more than 500 yards and 13 touchdowns. The two-time champ and 4-star quarterback has committed to Auburn University, 247 sports and "Auburn Undercover inside the Auburn Tigers" report.

Bobino is a 6'3, 305 pound, three-star defensive tackle for Huntsville High School. The big man has eight offers as he leads his 10-0 Hornets into the postseason in search of a state championship.

The winner of the 2020 Mr. Texas Football Award will be announced prior to the 2020 Mercari Texas Bowl and awarded to the recipient before the game on Dec. 31 at NRG Stadium.

Fans can now cast their vote as to who should be named Mr. Texas Football.