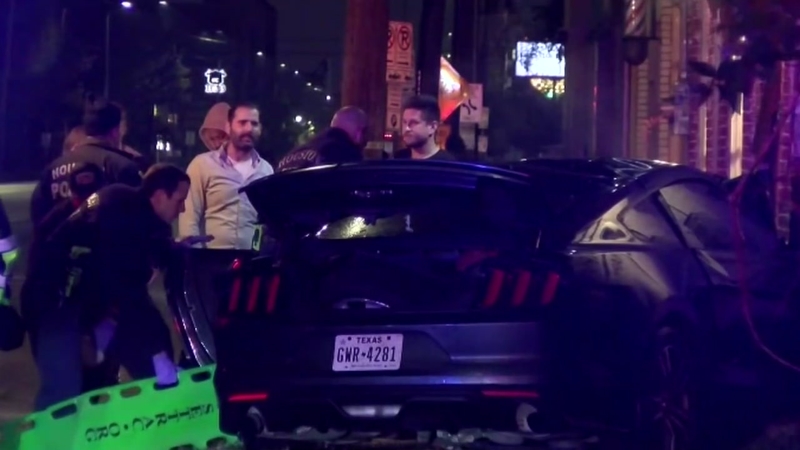 HOUSTON, Texas (KTRK) -- A Washington Avenue bar is closed Monday after a driver in a Mustang slammed into the business two hours before it closed overnight.

Authorities say the woman was heading east on Washington Avenue and lost control, crashing into the side of Darkhorse Tavern.

Several people were inside the business at the time, including three to four people at a table right next to where she hit the building. No one was hurt.

“It sounded like a bomb went off!” Thats what a customer at Darkhorse Tavern told us when a driver slammed into the bar’s brick wall. Several ppl inside the bar at the time. They weren’t hurt. But driver was taken to the hospital. #abc13 https://t.co/CP1LRXD0kt pic.twitter.com/Zt9H8NE1Se

NEW VIEW: manager at Darkhorse Tavern takes #abc13 inside his bar, showing damage after Mustang slammed into outside brick wall. Thank goodness no customers were sitting at the table by the window... https://t.co/CP1LRXD0kt pic.twitter.com/AKrVuMDPle

Police tell Eyewitness News an engineer will have to come out to inspect the bar since it has a large amount of structural damage.

Manager Paulie Maira was behind the bar at the time of the crash. He says that he rushed to check on his customers. When he saw they were fine, he moved to the driver who was passed out.

"Everybody came together, especially you know, the veteran who helped out," Maira told ABC13.

The Iraq veteran, who is also Maira's friend, broke the woman's back window with a brick.

When he couldn't get her door open, Maira grabbed a hammer to break her side window, so she could be rescued.

"She was breathing quite difficult, until she moved her head, and then she started breathing fine, but she still was unconscious," Maira said.

Eyewitness News reporter Courtney Fischer has a closer look at the damage left behind by a crash at a Washington Avenue bar.

The woman, who also slammed into a parking meter as she barreled toward the bar, was taken to the hospital, officials say.

She's expected to be OK.

Police don't know yet how fast she was driving. They will test her to see if she had been drinking.

Mustang slammed into the side of Darkhorse Tavern on Washington Avenue. Customers say the woman driver was passed out. She was taken to the hospital. Will be okay. Police will test her blood for alcohol. #abc13 https://t.co/CP1LRXD0kt pic.twitter.com/SV2ku76Qzr

Maira says a different driver hit the building about a year ago. People have complained about speeding on Washington Avenue before.

At this point, the driver is not charged with anything.