Drama, disruption hits the 'Dancing with the Stars' ballroom; a recap of performances 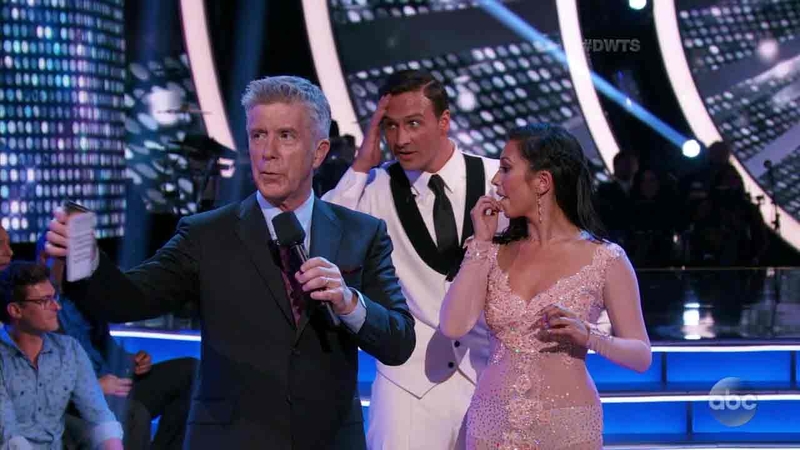 Drama, disruption hits the 'Dancing with the Stars' ballroom; a recap of performances

LOS ANGELES -- The jubilant mood that usually comes with "Dancing with the Stars" was marred at the season 23 debut when someone rushed the stage after Olympian Ryan Lochte performed. Security made quick work of things, and kudos to the director for not scaring the fans at home by showing us the drama. Other than that, welcome to "Dancing with the Stars!"

The show kicked off with a rousing number for the pro dancers (to the song "On Top of the World") and shot at Los Angeles' Griffith Observatory. If you're not from Los Angeles, it's the perfect setting to be on top of the world.

With 13 couples on the rundown, Tom Bergeron and Erin Andrews had to jump right into the competition. Here's a rundown of the first week scores, from highest to lowest:

Laurie Hernandez- 31 out of 40
No one was surprised to see how well the Olympic gold medalist did on the dance floor. She's a natural. Her partner Val Chmerkovskiy looked so, so happy to have this little bit of clay to mold into a great dancer. Head judge Len Goodman appreciated that Val led Laurie down a proper Latin dance route. Carrie Ann Inaba thought she completely lit up the ballroom and appreciated her hunger for knowledge. Julianne Hough called her the total package.

James Hinchcliffe- 31 out of 40
The race car driver is well known in his IndyCar world but after this week, he's bound to get a lot more Twitter followers who are going to know him for his dancing. Julianne said he reminded her of her previous partner (and mirror ball winner), Helio Castroneves. And not because of the racing connection, but because he was good. Sharna Burgess choreographed a smooth foxtrot that head judge Len Goodman called a knockout.

Check out photos from the premiere of "Dancing with the Stars."

Marilu Henner- 27 out of 40
The "Taxi" star has been wanting to be on DWTS for years. Not only did she finally get her chance, she got her dream partner, Derek Hough. The 64-year-old actress called herself a "geeked-out fan girl" when she met the six-time dancing champ. He was equally impressed with her abilities and work ethic. Their jive to "Can't Stop Dancing" was called full on fabulous by Len, fantastic by Carrie Ann and quick and sharp by Julianne.

Jana Kramer- 27 out of 40
The country singer reveals her life is kind of like a country song right now. She's just split from her husband and is hoping DWTS will offer a bit of healing. For the first week, it looks as though Jana and her partner, Gleb Savchenko, win the hottest couple award. Their Viennese waltz was easily the sexiest ever. And you don't often see Viennese waltz and sexy in the same sentence. Len wasn't wowed by the interpretation and wants to see them do a more traditional routine. Bruno Tonioli went crazy for it and said he can't wait for the rumba!


Calvin Johnson Jr- 26 out of 40
Football players have traditionally done well on DWTS and Calvin has plenty of potential. His biggest stumbling blocks: his size - 15 feet. Lindsay Arnold has her work cut out for her in trying to choreograph some fancy footwork with those feet. Carrie Ann thought he lit up the room and brought that footballer magic. Julianne said sure he needs more work but she was impressed.

Kenneth "Babyface" Edmonds- 26 out of 40
The prolific singer-songwriter-producer had one very pure and sentimental reason for doing this show: to honor his late Mom. He wants to keep making her proud. Allison Holker will help him on his quest. Their first dance was a smooth foxtrot that Julianne called timeless and classic; and Len said Babyface gave them style with a smile.

Vanilla Ice- 25 out of 40
A cha-cha to "Ice Baby"... yup, that's a first. Witney Carson (who wasn't even born when the rap song was a hit) had her work cut out for her. And to make things even more challenging, Vanilla Ice has a tough tour schedule so they've had half as much rehearsal time. Maybe that's why there was only half as much cha-cha content as there should have been? But the mashup of rap and ballroom worked. Len gave them much respect (but wanted more content); and Bruno thought he aced the performance aspect (but wanted more content).

MORE: Behind the scenes photos of "Dancing with the Stars" season 23

Terra's making history as the first little person to take part in any DWTS show anywhere in the world. Sasha Farber understands that everyone is questioning just how this will work, but she doesn't want to be treated any differently, and he's going to teach her like any other student. She has a great never-give-up attitude. Carrie Ann felt like she saw a star in the making. Julianne called her a firecracker and thinks Terra can defy all odds if she puts her mind to it. Len had the line of the entire night, though. Terra gave birth just six weeks ago. Goodman said after this routine, she's delivered twice in a month.

Amber Rose- 24 out of 40
Maks is back, and Mr. Chmerkovskiy gets to teach talk show host and model Amber how to ballroom dance. She told Maks she had some experience as an exotic dancer. It will be interesting how that might translate to DWTS. Julianne and Carrie Ann both praised Amber's beauty and confidence and want her to bring that to the dance floor. Bruno thinks she has a natural grace and ability.

Maureen McCormick- 22 out of 40
How many times will this season be able to write "Marcia, Marcia, Marcia?" Please have Eve Plumb in the audience soon. We saw Brady Bunch mom (and DWTS alum) Florence Henderson beaming with pride from the audience. Maureen has a big insecurity about dancing. Luckily, she is partnered with Artem Chigvintsev and they click right away. All the judges agreed that Maureen needs to relax in the ballroom. Carrie Ann loves her vulnerability and said it can serve her well on the dance floor.

Jake T. Austin- 22 out of 40
The 21-year-old former Disney kid wants to show a little more grown side to himself. His partner is new to the show, but not to TV dance competitions. Jenna Johnson was part of Fox's "So You Think You Can Dance." Jake was a little stiff and got lost a bit. Bruno encouraged him to just go for it, even if you go wrong. Carrie Ann sees charisma and potential.

Rick Perry- 20 out of 40
The former Texas governor and presidential candidate is taking a page out of Jerry Springer's playbook and using this opportunity to learn how to dance so he can waltz with his daughter at her upcoming wedding. Emma Slater has her work cut out for her. Len said it best, "the routine was pedestrian."

Ryan Lochte- 24 out of 40
Before the incident with protesters, Lochte learned a foxtrot from his pro partner Cheryl Burke. She chose the song "Call me Irresponsible" as a wink to Lochte's recent history in Rio. That seemed to break the ice and Burke let him know she wants to help him find is way again. Ryan admitted he regrets letting others down, and he doesn't want that to happen again. When the judges got to speak after the incident, Carrie Ann let Ryan know they are only there to judge his ballroom dancing. Len said he thought people should be proud of him.