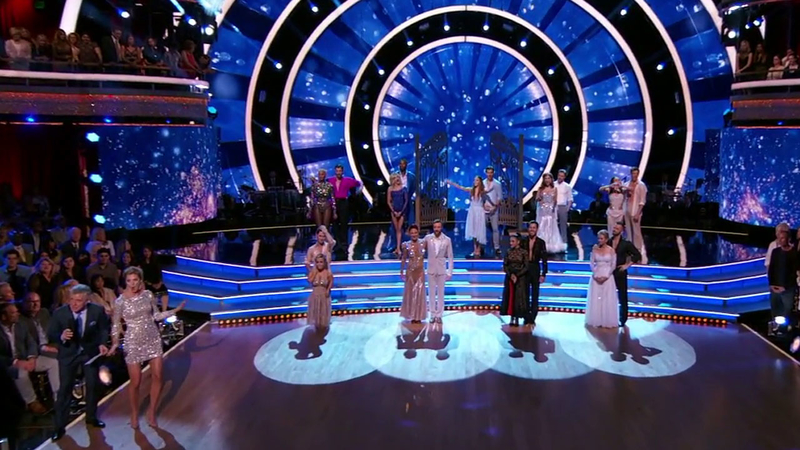 LOS ANGELES -- Week five of "Dancing with the Stars" is one host Tom Bergeron dubs "bring the Kleenex" night. It's the night when the celebrities reflect on their most memorable years and we see everything from the love of husbands, mothers, and daughters to athletes breaking records.

James Hinchcliffe: 29 out of 30
You can tell why James is so successful on the race track because he is very focused, not to mention hard on himself. James' memorable year helped explain to those of us who don't follow Indy Car closely how dramatic 2015 was for him. His crash during a practice session left him near death. His trauma surgeon said the only reason James survived was because he is in great physical condition. James humbly says the crash actually made him a better man. It certainly made him a dancer! Bruno Tonioli called his tango slick, sharp and controlled; Carrie Ann Inaba praised his posture and hold and called him and Sharna Burgess the ones to beat; and Julianne Hough thinks he has the best frame she's ever seen in the competition.

Marilu Henner: 27 out of 30
Marilu was able to get out of her own head this week and just dance. Her memorable year was 1978, for both the best and worst reasons: her mother passed away, and she was cast in "Taxi." She says it's the show that changed her life, and career. And the last bit of advice Marilu remembers getting from her mother was to never hold herself back. The judges all joined her after the dance for a group hug. Carrie Ann got a little philosophical and told Marilu that she had stopped TRYING to be great, and allowed herself to simply be great.

Terra Jole: 27 out of 30
Terra was dancing for her dad. The two were very close and she never got over the fact that he died when she was not around; and that she didn't get the father/daughter dance at her wedding. Sasha Farber said this contemporary routine would take its place. Bruno told Terra she was dancing to the beat of her heart and was sure her dad was smiling down at all of them.

Jana Kramer: 26 out of 30
Jana gave birth to her daughter at the beginning of this year so of course that makes 2016 her most memorable. Jana says her baby girl gave her strength and purpose, especially after revealing she had been in an abusive relationship many years ago. She now wants to set a good example for her child. The contemporary routine to Martina McBride's "In My Daughter's Eyes" brought tears to everyone's eyes in the ballroom. Carrie Ann thanked Jana for her courage and called this a breakthrough night; Julianne praised her perseverance, both on the dance floor and in life; and Bruno appreciated that she took risks and committed herself to the routine.

Laurie Hernandez: 25 out of 30
Yes, the Olympian is surprisingly in the middle of the pack. They might be grading on a curve because Laurie is just THAT good. She did struggle a bit with the paso doble but it could also be because she's only 16 and that's a pretty intense and passionate dance. And of course Laurie chose 2016 for her most memorable - Olympic Gold! Bruno called her an irrepressible force of nature; Carrie Ann thinks she's part warrior/goddess; and Julianne said there is no denying she's a fantastic fierce firecracker.

Calvin Johnson Jr.: 24 out of 30
Everyone got a bit of a laugh when Calvin chose 2012 for his memorable year. Yes, it's the year he broke Jerry Rice's longstanding football record for receiving yards in a season. But then partner Lindsay Arnold chimed in that it was the year she graduated from high school! Calvin has been blessed to always have a strong family tie to rely on, and it's a tradition he carries on with his own children. His dad was on the football field when he broke his record; and he was in the ballroom tonight to see his son perform a jazz routine. And so was Jerry Rice! Believe it or not the two had never met until now. Could Calvin's most memorable moment have just changed?

Ryan Lochte: 24 out of 30
Ryan is as surprised as anyone that he's still here but with Cheryl Burke's encouragement and his mom's unconditional support he's starting to believe he deserves to be here. He chose 2008 for his memorable year because that's when he won his first individual Olympic gold medal. Ryan also realizes his world changed in the blink of an eye after the Rio games and he credits his mom for standing by him. The judges were all happy to see him show a more vulnerable side. Bruno thought this was his most honest performance yet; and Cheryl thanked him for sticking with it.

Maureen McCormick: 24 out of 30
We learned life wasn't always so golden for Maureen after "The Brady Bunch" ended. She went through a very hard time, which included drug addiction. And then she met her husband Michael and 31 years later they are in as much love as ever. Her foxtrot with Artem allowed her to channel that love story in a beautiful way. Julianne felt like we saw life imitating art with this routine; and Carrie Ann reminded her that slow and steady wins the race.

Amber Rose: 24 out of 30
Amber's adorable little boy Sebastian was born in 2015 so that is her most memorable year. She wants her time on the show to be a celebration for all women, for all moms; she wants her son to see her as a superwoman. Amber struggled with the samba a bit in rehearsals but Maks talked her off the ledge. Julianne loved the concept, content and costume in the routine; and both Julianne and Bruno advised her to trust Maks completely. He will not let her down.