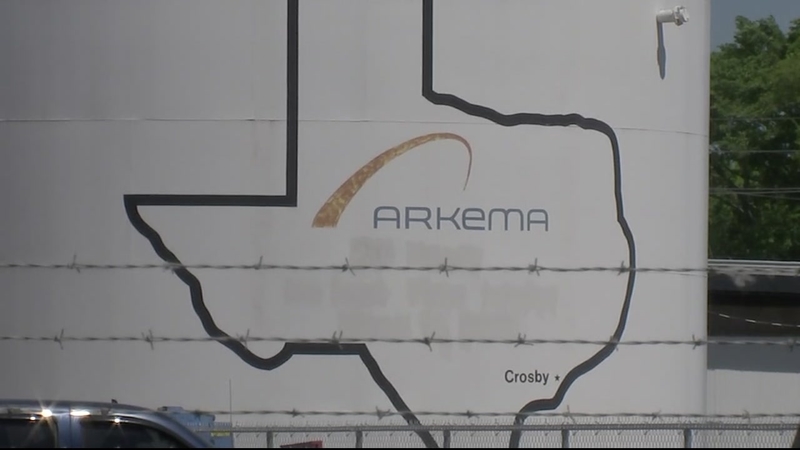 The news comes nearly two years after the city filed a lawsuit against the company for the release of chemicals and subsequent fire after Hurricane Harvey.

Mike Keough is being charged with felony assault in connection with misrepresenting the danger faced by the community outside their gates, leading to the injury of two deputies.

Russell Stacy mows the grass at his home in the shadows of Arkema.

"He's charged because of misrepresentations he made that put the deputies in harms way, by telling emergency management and representatives here on the ground that they had real-time data monitoring of the tanks that were filled with these poisonous and toxic chemicals, which they knew would explode when they reached a certain temperature," Ogg said.

According to Ogg, the evidence shows that while reassuring emergency personnel, several of the chemical containers were completely unmonitored.

A toxic cloud was captured on dash-cam video by deputies on the scene, and deputies and EMT personnel exposed to the toxins were ordered to report to San Jacinto Methodist Hospital for decontamination.

Statement by Rusty Hardin on behalf of Arkema:

Harris County prosecutors are doubling down on an unprecedented and outrageous attempt to criminalize a natural disaster. They have filed more charges trying to prosecute a company for the act of God that was Hurricane Harvey. We can only conclude that with a May trial date looming, prosecutors realize they can't prove the previous charges and are grasping at straws. This is a political prosecution in search of a theory.

Many citizens, businesses and even Harris County courthouses have still not recovered from the unexpected disaster that Harvey was. Yet, the DA's office persists in trying to place criminal blame on Arkema and its employees despite their remarkable and heroic efforts amid the six feet of water no one predicted.

The Harris County Flood Control District concluded that in the area of Arkema's Crosby plant, Harvey was a 5,000- to 20,000-year rainfall event. That our county prosecutor persists in desperately seeking a way to criminally blame a company for the ravages of this storm should give us all pause. Arkema stands by its employees and will fight this unwarranted political action.

In 2018, CEO Richard Rowe and plant manager Leslie Comardelle were charged with felonies for 'reckless release of chemicals' associated with the fire.

The chemical release and fires shut down a mile and a half around the plant for days. Two hundred people had to be evacuated.

At least 21 first responders and other officials were injured when they breathed in some of the fumes while arriving at the plant. Many of those first responders are now filing civil lawsuits in federal court.

Arkema is also the subject of numerous civil lawsuits, including one by Harris County and another by Liberty County.

Statement by Dan Cogdell, on behalf of Mike Keough of Arkema:

That the DA's office has chosen to Indict my client Mike Keough is absurd. Mike was in Pennsylvania during Hurricane Harvey and he gathered the correct list of chemicals from our team and sent it to the command center on the scene. Mike provided needed safety information hours before the first fire occurred that, if followed, would have enhanced the safety of emergency responders. He communicated with the Unified Command to provide them with the best information possible to allow the best and safest decisions to be made. He did all of those things in large part to assist and protect the very people he is now charged with "recklessly assaulting." It is absolutely beyond rational thought that he is charged at this late date with assault. There has, quite literally, never been a prosecution like this one for one singular reason - what Mike did wasn't a crime.

Arkema and its employees had a crisis plan for a 500-year-storm but no one had a plan for the 5,000-year or worse storm that hit the company in Crosby. Every major Harris County Official recognized this during the historic nature of the flooding and its aftermath. The flooding that occurred at Arkema and across Harris County was unforeseeable. To blame someone for correctly doing his job so the DA can look tough or chase political favor turns our system of justice on its head.

Quite simply, I am appalled that the DA's Office has chosen this path of charging Mike. It's wrong, it's legally and factually unsound and we look forward to immediately clearing his name in a jury trial as soon as possible.

The felony assault charges announced Wednesday can carry a punishment of 2-10 years as a third-degree felony.