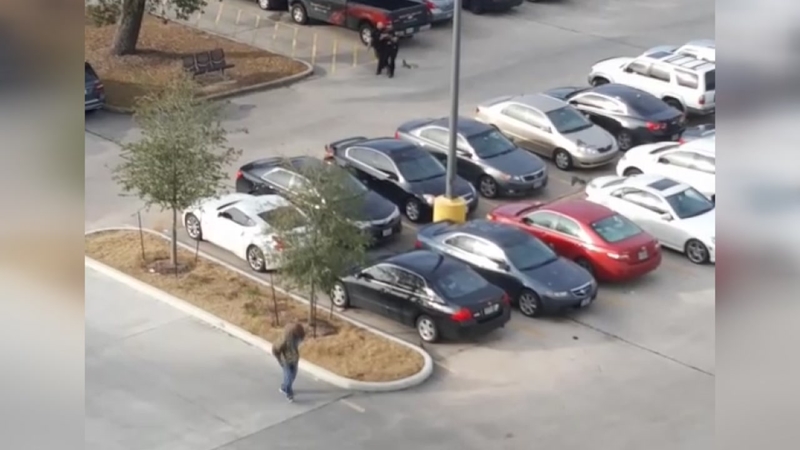 Witness captures video as officers close in on armed suspect

HOUSTON, Texas (KTRK) -- Police are investigating an officer-involved shooting that happened on the feeder road at 5475 West Loop South near Fournace.

The incident started as an armed robbery at the Exxon Mobil gas station at 10721 South Post Oak just after 8:30 a.m. Thursday.

The Houston Police Department says the suspect, who was identified as Anthony Williams, robbed the store at gunpoint, taking money and beer before leaving in a black Toyota Avalon.

The clerk then went into the parking lot to take photos and videos of the suspect's vehicle. Police say when the suspect noticed he returned to the store to confront her.

The clerk ran into the store and locked the doors. Police say when Williams realized he couldn't get back into the store he fired several shots at the door before taking off.

A short time later the Bellaire police received a call for multiple crashes in the 5600 block of the West Loop.

Police say Williams refused to follow commands from officers. He reportedly got out of the vehicle with a handgun and refused to drop it.

Williams fled on foot and continued to display his weapon. Officers say he pointed it at bystanders and officers.

Williams then attempted to carjack a passing vehicle.

At this point a lieutenant, a 22-year veteran with the Houston Police Department, made the decision to open fire.

Williams dropped his weapon after being shot.

Emergency responders attempted to revive Williams but he died at the scene.

No civilians were hurt in the incident.

Police officer radio chatter shows how tense the situation was, as an armed gunman walked toward the HCC campus

The incident was also not far from the HCC Southwest College West Loop Campus. The school tweeted that the campus was secure and operating normally.