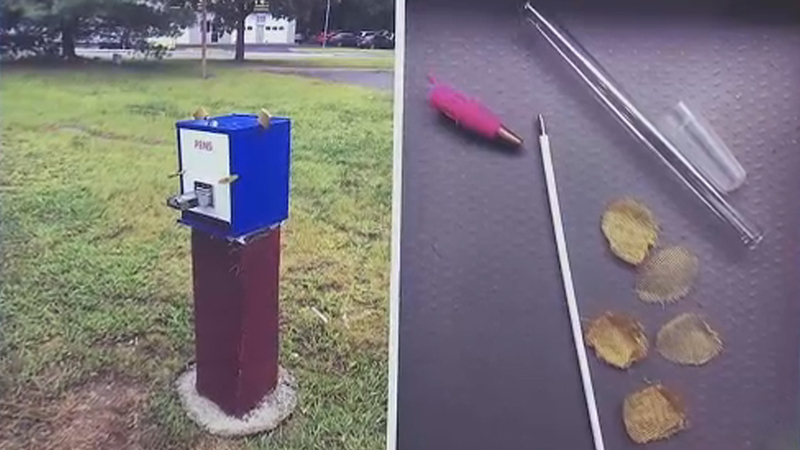 The town of Brookhaven received complaints about the machines over the weekend. Two of them, one of which was partially destroyed by vandals, were removed.

The blue and white vending machines, which featured the words "Sketch Pens" on the outside in black and red font, were mounted in cement into the ground and dispensed a small glass tube and a filter. Included was the top of a pen, which could be put into the glass tube to form a pen, along with an ink tube.

The "pens" cost $2 each, and the machines would accept the payment in the form of eight quarters.

"You think you've heard of everything," Town of Brookhaven Supervisor Ed Romaine said. "I continue to be surprised by some of the audacity of those that would break the law in promoting drugs and drug paraphernalia."

One dispenser was found in front of a shopping center. Scott Malz took a video of it on Saturday and posted it to Facebook.

"I wanted the community to see what was going on and try to get rid of it as quick as possible," he said. "Because that's actually a bad area for drugs."

Danielle Blom said one was located just outside her apartment complex in Medford. She said an angry resident smashed it to pieces.

"We've been here for three years," she said. "We've never had any problems, and now this. So it's pretty disgusting."

Police will decide if the machines warrant criminal charges.

"To sell a pipe is not illegal, but this is considered drug paraphernalia," Town Councilman Michael Loguercio said. "And it also is being dispensed from a machine that was installed illegally per town code."