Hockey fan in wheelchair dresses as Zamboni for Halloween 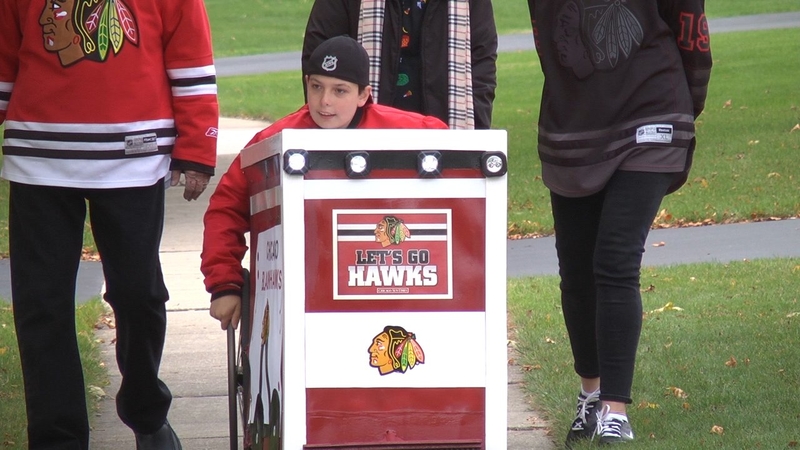 The 13-year-old is a die-hard Blackhawks fan and sled hockey player himself.

"I've been to a lot of Blackhawks games, I've met Patrick Kane before," said Fanella--as if his Hawks sweater and ballcap wouldn't tip passerby off.

So he decided to dress up as the United Center's Zamboni this year. It's a great idea for any avid hockey follower, but Luke picked this costume for more than just his love of hockey.

"I was born with a muscle disorder in my leg," he explained, as a pair of crutches rested in the other room.

The muscle atrophy makes it hard for Luke to walk, especially for a "trick or treat" outing.

So he looked up costumes that could incorporate his wheelchair and put his Uncle Jim to work.

"Some nights I was working on it 'til two a.m.," recalled Jim DelGenio, who used a cardboard box and "lots of duct tape and glue" to create a masterpiece complete with a broom, working lights and of course plenty of Blackhawks spirit. The rig attaches to Luke's wheelchair and cruises along neighborhood sidewalks.

"It makes me feel good. I think it's cool that I can do that, like incorporate it into the things I need in my life," said Luke, adding "Hockey means a lot to me. I'm a Zamboni because I've always wanted to ride the Zamboni while they're cleaning the ice cause it would be a cool experience and you could actually see what the players see when they play a game."