'Can safe' lands Raleigh woman in Honduras jail, says it's a mistake 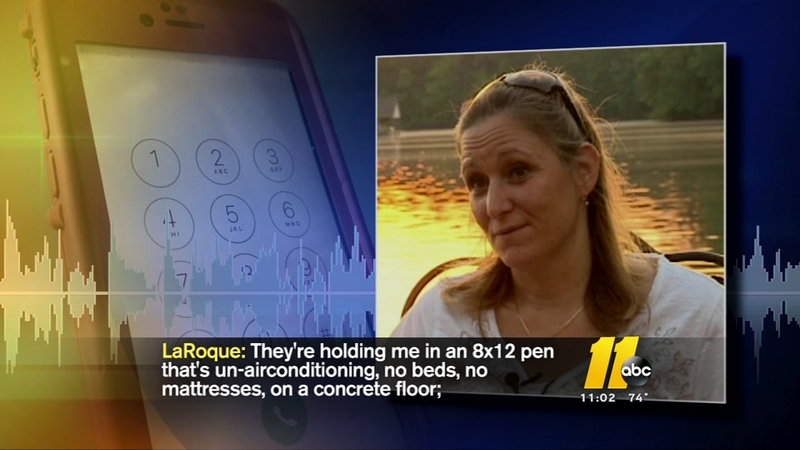 RALEIGH, North Carolina -- A Raleigh woman's husband said her trip to Honduras has turned into a nightmare after she was charged with trafficking cocaine using a device he says was purchased to protect valuables.
The latest:


However, Brandon LaRoque said it's all a misunderstanding. He said his wife went to the Honduras islands of Roatan and Utila with a friend from North Carolina to tour properties with a real estate investor. She took a mini-personal safe with her designed to look like a soft drink can.
He told ABC11, "We noticed that Utila is a little more primitive and the hotels weren't quite as nice, so they didn't have safes in them."

ABC11 purchased and cut open our own can safe and while some white particles fell out of the lining, they looked and smelled like plastic

On Monday night, ABC11 spoke exclusively to Amanda Laroque by phone as she was awaiting a hearing in front of a Honduran judge.

"It's been a nightmare. So I'm just ready to go home," she said.

She described the suffocating conditions of her incarceration.

"They're holding me in an 8x12 pen, that's un-air-conditioned; no beds, no mattresses, on a concrete floor," Laroque detailed. "There's no ventilation, there's just one window with little bars and the door.

"I mean this stuff is so crazy. I don't think you can make it up," Laroque added. "I mean this is over an iced tea soda can."

In an update, Monday evening, Laroque's husband told ABC11 that she threw up in court earlier and her attorney is trying to get her transferred to a hospital so she doesn't have to spend another night in that hot jail cell. He also said a representative from the U.S. Embassy in Honduras did arrive in Roatan on Monday on Laroque's behalf.

LaRoque said before his wife left the states they went to a local retailer and bought what's known as a "can safe."

In this case, it was an Arizona Iced Tea can that has a lid that screws off so cash and valuables can be placed inside. The can is lined with plastic and weighted so it feels like a full drink.

A Raleigh woman's husband said her trip to Honduras turned into a nightmare after she was charged with trafficking cocaine.

"When she was leaving, they (TSA agents) stopped her and wanted to look at the can so she showed it to them," LaRoque said.

He said they cut the can open and when white particles in the lining fell out, agents assumed it was cocaine.

Amanda LaRoque in custody in Honduras.

ABC11 spoke with LaRoque just before he boarded a flight to Honduras.

"They've actually arrested her and thrown her in jail for possession and trafficking of cocaine," he said. "And I'm on my way down there to try to get her out. They've actually put her in something... I guess they call it 'the cage' on the island."
He has posted a plea for Facebook friends to contact their representatives in Congress and anyone else who can help his wife.

The couple owns a popular bar in West Raleigh called "The Goat" and is well known in the community.

LaRoque claims authorities said the Roatan airport didn't have field testing kits for the cocaine and that it will take 10 days for a lab test.

He said has already contacted U.S. officials in Honduras, "I've been in touch with the embassy but they can't do anything for 24 hours."

A spokesperson for Congressman David Price, who represents the district the LaRoque's live in, sent this statement to ABC 11:

"Congressman Price is aware of Mrs. LaRoque's situation, and his office has been in contact with her family. His office has also contacted the U.S. Embassy in Honduras, which is responsible for providing assistance and ensuring due process for U.S. citizens detained abroad, regarding Mrs. LaRoque's case."

"Senator Tillis'office has been in contact with the LaRoque family and we have been making inquiries to the appropriate channels on her behalf."

LaRoque sent ABC11 a video in which his wife talks about her predicament. Near the end, she gets choked up saying, "There's nobody here that speaks English. Somebody really needs to help me."

EMBED More News Videos
ABC11 went to the same local retailer where the LaRoque's bought their can safe and purchased one.
We cut it open and while some white particles fell out of the lining, they looked and smelled like plastic.

LaRoque said he sent a link to Amazon and pictures showing the can safe to the real estate agent assisting his wife.

A WARNING TO OTHERS

"She said their mouths dropped, but at that point, they had already charged her and they kind of have to follow through now because they thought it was like something we made I guess," LaRoque said.

LaRoque also sent ABC11 a video of a drug dog checking out his wife's bag at the airport. It shows the dog sniffing but not reacting to any drugs.

But ABC 11 spoke with a drug dog trainer in Raleigh who said it's hard to say if the dog was alert or not without knowing how it was trained to alert.

EMBED More News Videos
LaRoque said he wants to alert others to what has happened to his wife so they won't make the same mistake.

Amanda LaRoque has another court hearing set for Friday.

ABC11 is a sister station of ABC13