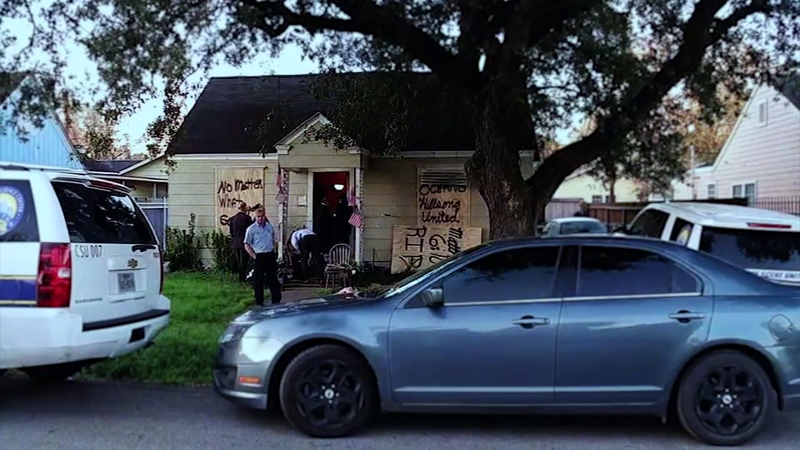 HOUSTON, Texas (KTRK) -- As Houstonians await word on how the FBI, Harris County District Attorney and Houston Police Department will handle the Harding Street Raid, a group of 21 people is coming to its own conclusion.

Unless city policies change, you will never know how that group rules on what police officers did that day.

The group, Houston's Independent Police Oversight Board (IPOB), is set up by mayoral executive order. Part of that order describes the IPOB's Objective: "To provide a system of increased accountability and transparency and to facilitate resident input into the internal investigative process of the Houston Police Department."

RELATED: Federal investigation of Harding Street raid could wind up with officers in prison

It's an odd goal for a group that never lets the public see a single page of what their independent oversight turns up.

In reminding Houstonians about the IPOB work, Houston Mayor Sylvester Turner told reporters on Feb. 21, 2019, "They can review, make recommendations from a citizen's point of view on what things they can do to improve as we move forward."

The group's chairman, Marvin Hamilton said that day, "We will be tough, we will be fair and go where the facts lead us."

Hamilton, a retired postal worker with a graduate degree in criminal justice, leads a team that reviews Internal Affairs files once investigations are complete. The IPOB reviews department investigations of excessive force, shootings, serious bodily injury or deaths, and most officer discipline.

Hamilton told ABC13 the group has wide latitude to ask the police chief and the department's leadership to gather more information.

"If there's some information missing that you needed to help you make a decision, somebody would get that information for you," Hamilton said,."I would say five, 10 percent of the time, our recommendation is different from what the chief does."

When it does disagree, the recommendation is only advisory. Houston's police chief does not have to accept it. The board's chairman also sits on the department's Administrative Disciplinary Committee.

The board is made up of 21 members. They cannot have law enforcement experience, but do get training by the Houston Police Department. They meet to read and review case files completed by the police department's Internal Affairs Division.

Each member decides for him or herself if the investigation is sufficient and conclusions were correct. Panel chairs can ask questions or request more information, and then write recommendations to the chief.

IPOB Chairman Hamilton tells ABC13 that while he wishes sometimes he could tell the public what they don't know, he agrees with the policy to keep IPOB's work confidential. "It's too many people's lives involved for everything to be out there."

When asked, he admits he never asked a chief or the mayor to relax the rules. He wants the public to know - even some of his skeptical friends - "We have their best interest at heart and it's not a rubber stamp."

Joe Gamaldi, the president of the Houston Police Officer's Union, supports the way the board is set up and the work it does.

"They're doing a good job to represent the public in cases, even where the officer is sustained."

Gamaldi told ABC13 he's seen the board be both lighter and harder than the department in recommending officer discipline, but again there is no way to verify that.

The privacy works well, Gamaldi says. "They are constantly engaged on every single discipline case and we don't want an oversight board turning into just a political animal that's just interested in making headlines."

Our investigation into how the IPOB operates drilled deeper and left us with more questions.

"What do these officers tell you when they come in and interview with the board?" ABC13's Ted Oberg asked Hamilton.

"They didn't interview with us," Hamilton replied.

Nor do they hear from people who make complaints about potential police misconduct.

It's not that they're lazy. Far from it. The board isn't set up to gather any independent fact, and that worries some civil rights attorneys.

Joe Melugin has sued the Houston Police Department over officer-involved shootings in the past, and has cases pending against HPD. He's one of the few Houstonians outside board members who's ever seen the board's work.

When ABC13 Investigates asked to see the IPOB reports, we had no luck. Our Texas Public Information Act requests were denied. IPOB has to fill out an official form on every case it reviews. If there is disagreement with the department discipline decision, more paperwork has to be filled out. Every word on every page of those forms is confidential.

Back in the days following the botched raid, Houston Police Chief Art Acevedo told Houstonians, "It's important for people to know, this (the IPOB) is not a rubber stamp."

Attorney Melugin, who has actually seen some of the paperwork, isn't sure. He was only able to get the IPOB forms after suing the city, forcing them to turn over internal files as part of discovery. Those records are now part of a public court record and they're surprisingly brief.

13 Investigates reviewed the IPOB forms in that court record. The forms are primarily a checklist of who looked at what file and whether they concur with the department's findings. Even in the forms turned over for the court record, panel member's names are redacted.

If there is disagreement, a short description of what it was is supposed to be included by IPOB policy. In one 2012 case file that description appears to be missing. In another from 2012, two members note more training should be provided but don't question the justification for the particular officer-involved shooting. Remember, 13 Investigates requested more recent files, but was denied access.

As for the board being a rubber stamp, Melugin cautions us, "Until they're going to let us look behind the curtain to see what's going on. I don't know how we can just assume that it's not a rubber stamp."

We asked Mayor Turner's office if he would consider making more of the independent police oversight board's work public. The mayor's office tells us before that decision can be made, they will work with HPD to determine how much latitude it would have under state law and contracts to release more than it has in the past.

Have a tip for Ted Oberg? A problem to solve? Get in touch with us on our tip page, or send a tip below. (On mobile? You can open our form by tapping here.)
Report a correction or typo
Related topics:
houstonted oberg investigateshouston police departmentraid
Copyright © 2021 KTRK-TV. All Rights Reserved.
TED OBERG INVESTIGATES