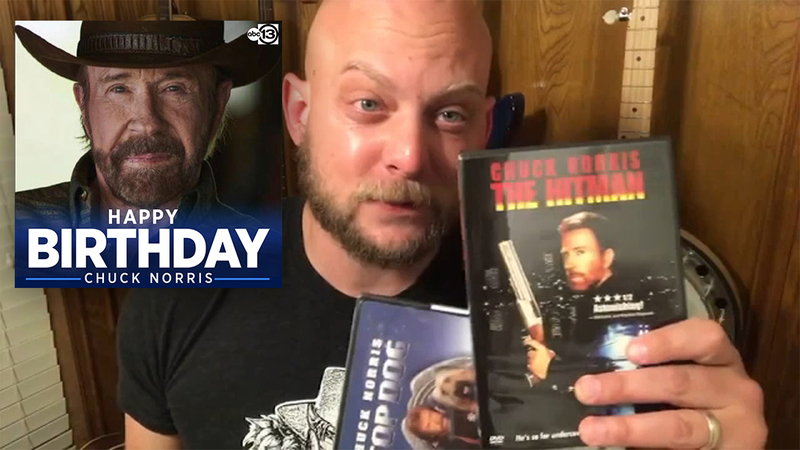 NAVASOTA, Texas (KTRK) -- Chuck Norris, the iconic martial artist, actor and entrepreneur, turned 81 today. In his honor, some of his neighbors in the Navasota area compiled a short video wishing him a happy birthday.

Ben Morris and John Dittfurth, with the band 'The Great American Boxcar Chorus,' produced the segment, which features scenes from Navasota and a toast to the Grimes County resident.

"I can't help but think of Chuck Norris being our resident celebrity and how much he's brought to this community," Dittfurth says in the video.

"We're going to celebrate tonight and watch some 'Top Dog' with the kids and maybe later, kick back with the Mrs. and watch a little 'The Hitman' all while enjoying a couple of ice cold CForce Waters," Ben Morris said. "Thank you for everything you do and Happy Birthday, Chuck."

CForce Water is headquartered just outside of Navasota and was launched in 2015 by Norris and his wife, Gena, just across the road from his Lone Wolf Ranch.

He was born Carlos Ray Norris on March 10, 1940, in Ryan, Oklahoma. He later moved to Kansas and California before joining the U.S. Air Force where he served for four years.

He opened a martial arts studio and went on to win the title of world champion at the International Karate Championship. He befriended martial arts master and actor Bruce Lee while competing. He made his acting debut in the 1969 film 'The Wrecking Crew.'

He went on to star in dozens of movies, as well as the original version of the TV series 'Walker Texas Ranger.'
Report a correction or typo
Related topics:
arts & entertainmentgrimes countycelebrity birthscelebritybirthdaythis day in history
Copyright © 2022 KTRK-TV. All Rights Reserved.
BIRTHDAY
Kate, Duchess of Cambridge and Britain's reliable royal, turns 40
Houston hospitals welcome first babies of 2022
Ryan Reynolds responds to Betty White saying he can't get over her
Betty White shares her secret to happiness ahead of turning 100
TOP STORIES
51-year-old suspect in corporal's ambush killing on the run
Sergeant was to walk daughter down aisle until his hit-and-run death
Mom shares story of son's 'scary' battle with COVID complications
H-E-B's Scott McClelland retirement and what's next
Drying out but staying cool this week
LULAC set to sue Houston City Council for lack of Hispanic members
New security director aims to improve safety for Jewish organizations
Show More
IRS changes you should know before submitting taxes
Cause of death revealed for 23-year-old woman found dead after date
Texas among states suing Google over claim it's misleading consumers
Man accused of stabbing K-9 in The Heights now charged
'We knew something big exploded': ABC13 recalls moment of Watson blast
More TOP STORIES News