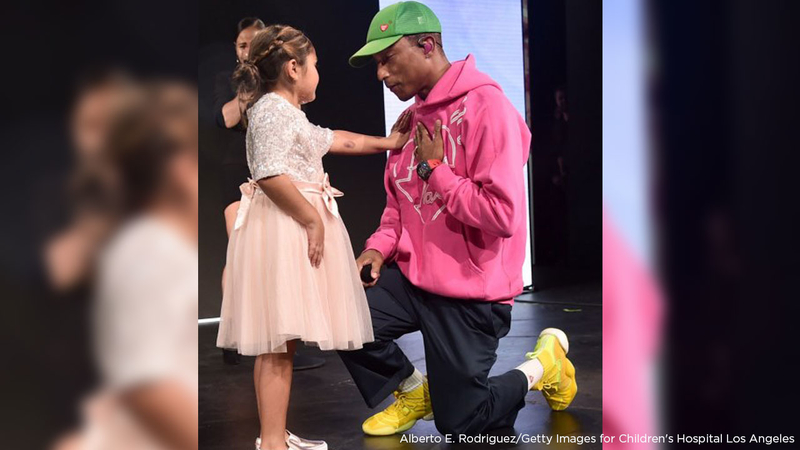 LOS ANGELES, California -- A former patient of Children's Hospital Los Angeles stole the heart of hip-hop artist Pharrell Williams during a touching moment at the hospital's "From Paris with Love" gala Saturday night.

Nine-year-old CHLA alumna Eliana Georges went on stage during the rapper's musical performance, danced with him and told him she loved him. The little girl then told the audience she wanted a moment with the rapper, who turned off his mic and hers. The two spoke privately as she placed her hand on his shoulder and shared a heartfelt hug.

Eliana spoke with Eyewitness News on the red carpet and shared her big dreams.

"I want to be a baby nurse, a doctor, a singer, an actress," she said excitedly.

There were big names at the big gala for Children's Hospital Los Angeles on Saturday.

Other big names crowded the Microsoft Theater for the big gala, which raised $5.5 million for the hospital by the end of the night.

Among the honorees was legendary L.A. Dodgers announcer Vin Scully, who skipped the Dodgers' Game 7 to receive the Courage to Care award from CHLA.

"By donating and helping these people, giving a gift to parents and families, you never know," he said. "Ours is one, and we thank you."

Of the $5.5 million raised for the hospital, $1 million was donated by Kimmel and his wife, Molly.