Child riding in school van killed in crash near Trinity 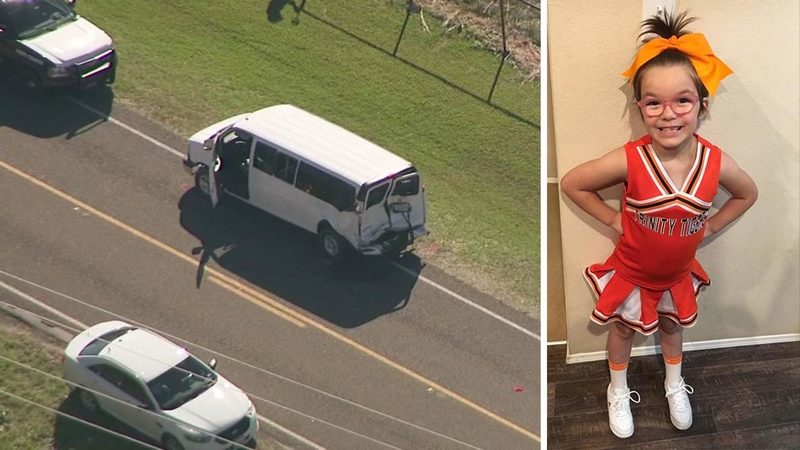 TRINITY, TX (KTRK) -- A child has been killed in a crash on the way to school in Trinity this morning.

The accident, involving a Trinity ISD van, happned on FM 1893 in Trinity County, about five miles west of Trinity.

At about 7:30am, an eastbound 2015 Chevrolet Trinity ISD van loaded with eight children was stopped to pick up a child when it was struck from behind by a 2008 Ford pick-up, occupied by the driver and three passengers, according to the Texas Department of Public Safety.

A fund has been set up for the family.

Skyeye video of accident in Trinity

Five children were taken by ambulance to ETMC with non-life threatening injuries. Three other passengers and the driver of the ISD van were taken to ETMC by private vehicle as a precaution. All the children were properly secured at the time of the crash, according to investigators at the scene.

The driver of the van is identified as 55-year-old Chandra Wheeler from Trinity, TX. The driver of the Ford pick-up is identified as 17-year-old Micah Brock, also from Trinity. Three passengers in the truck were transported to ETMC in Trinity, two by ambulance and one by private vehicle. The female driver was reportedly not injured during the crash.

No other injuries were reported as a result of this crash. The roadway is currently closed and motorists are encouraged to find alternate routes.

At the Brock family home, we talked to the pickup truck driver's father, Milton who told us his three other children were also in the truck on the way to school. He says Micah had no cell phone with her and wasn't adjusting the radio, but the sun, as she drove east, was blinding her.

"Everybody who drives on that road knows that. If a kid is on the road, if a cow is on the road, you're driving hoping nothing is there," said Milton Brock, "That doesn't take away from the pain the (child's) family is suffering."