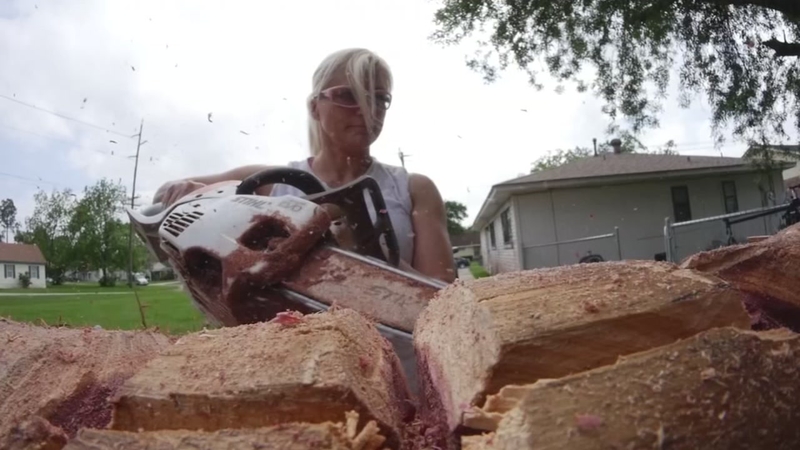 LA PORTE, TX (KTRK) -- It's just another day in the office for Della Meredith. It's there where her creations come to life. You could say she's had the artistic touch for quite some time now.

"I taught art in public schools for 8 years," Della said.

But she doesn't fit the bill as your typical artist. Her pieces are that of a different grain.

"I work mainly with wood. I'm a chainsaw carver," Della explained. "It's like a stereotype, I guess I should be a guy doing it. They're like, you don't look like you should be able to do that."

From totem poles, statues, even bar stools, Della definitely has an eye for detail and style.


Della told us, "The most recent person I'm carving is Peyton Manning."

Commissioned by a client that used to live in Colorado, they wanted her to make a five-foot Peyton Manning carving after they saw her J.J. Watt creation last month.

Importing woods locally and out of state, her preferred choices are cypress or cedar. She says they cut like butter, because of their soft texture.

"The cedar has a really fine sawdust. So when you carve it, you get a really detailed piece. And it's easier also on your tools because it's not going to wear out a blade as fast," Della explained.

Della says these cuts above the rest don't come easy, but there's always something new to discover about the craft.

Della said, "I'm still learning it and getting better at it too."

She picked up the chainsaw and started carving about two years ago, taking safety very seriously with each cut.

"I'm really careful. And also the blades, the bar that I use on the smaller saw is made for carving, and it's safer," Della said.

Her kids think what she does is pretty cool too.

Della said, "They love it. I'm always home so they're excited about that."

And with the completion of every piece --

"It's seems really hard at first, and then it's such a big accomplishment. It's a good feeling," Della said.