Teen sneaked out of home, took parents' car on joyride and slammed into a house 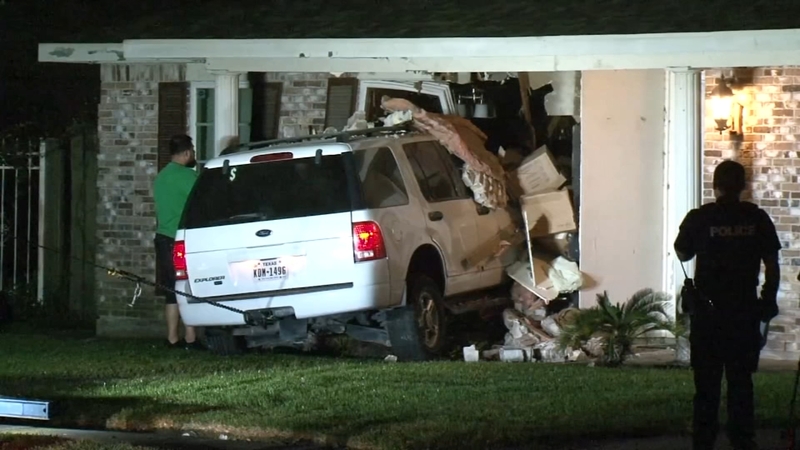 Teen who took parents' car on joyride slams into home

HOUSTON, Texas (KTRK) -- Police are investigating a crash involving a teen who reportedly took his parents' vehicle on a joyride, led authorities on a chase and slammed into a home.

According to police, at around 1:30 a.m. Tuesday an HPD unit attempted to conduct a traffic stop on South Sam Houston Parkway when the driver took off and led them on a short chase.

Houston police say the driver turned down a residential street, not knowing there was a dead end and crashed into a house in the 12000 block of Kirkholm.

At the time of the crash, police say three people were inside the home, including a woman who was in the room where the SUV crashed. Police say she suffered a broken foot but is expected to be okay.

"I was completely asleep in the bedroom. (I) didn't realize what had happened until I walked out the door and saw the end of the car. It was crazy," the homeowner Tanya, who didn't want to use her last name, told ABC13.

Officials learned the driver, a 15-year-old boy, reportedly took his parents' SUV out for a joyride without them knowing.

"We're trying to figure that out. We think the car is registered to one of his parents, so we think maybe he snuck it out," Lt. Larry Crowson said. "New driver, didn't know how to drive."

Vehicle ran into a residence after a short pursuit. 12100 Kirkholm. No serious injuries reported. 202 pic.twitter.com/jhKivzGcIY