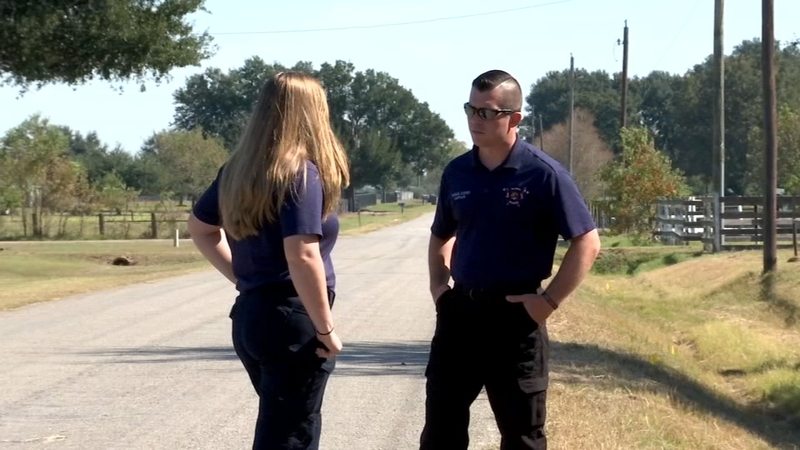 WALLER, Texas (KTRK) -- A couple is being hailed as a pair of heroes for saving a woman who was trapped inside a burning car after being involved in a serious crash in Waller.

Michael Mathes, a firefighter who was off-duty at the time, said he was pulling into his driveway Monday when he heard a crash.

Off duty firefighters sprang into action, after a crash happened outside their home in rural Waller County! They pulled a woman out of her burning car! Talk about being in the right place at the right time! Their story at 6. @abc13houston pic.twitter.com/CQsSHgkyi0

He went to investigate and noticed a woman was inside a burning car.

"The flames were already starting to come over the windshield of the car so (I) didn't have much time to think about anything than to get her out," said Mathes. "I couldn't sit there and watch her burn."

His wife Christina, who is also a firefighter, stepped in to help.

"Everything was popping off," she recalled. "Pieces were flying, so I helped him and we drug her further back."

The fire department arrived to the scene and the woman was sent to the hospital. The couple, who say they constantly work as a team, said they were fortunate for being at the right place at the right time.

"I broke down in front of everybody just because the adrenaline," said Michael. "Just knowing that it could've been a lot worse than what it was, especially for her, no one deserves to have that happen to them. I just think the Lord put me in the right place in the right time to make sure she had a second chance."

Flames were covering the vehicle as the rescuers ran over to help.