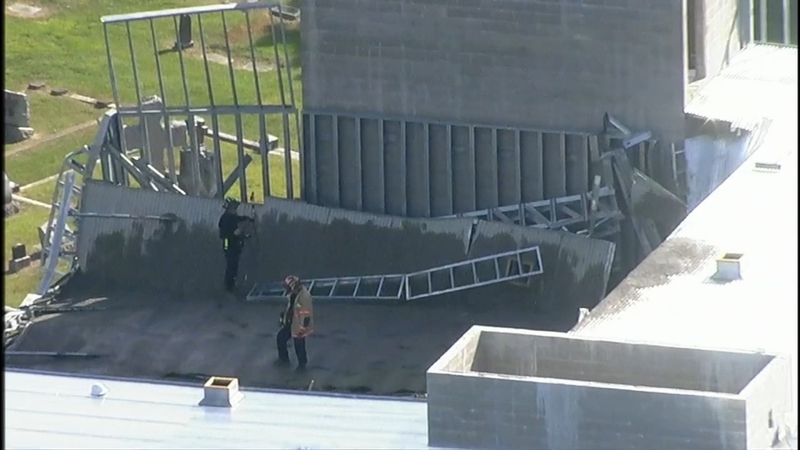 HOUSTON, Texas (KTRK) -- Nine people were hurt when the roof of a hotel under construction collapsed Monday morning at 3498 North Main and I-45 in north Houston.

Deputy Chief Richard Galvan with the Houston Fire Department says workers were pouring concrete when part of the floor collapsed. A Houston Public Works spokesperson told 13 Investigates that the city sent a senior inspector to the site following the collapse.

Upon initial review of the incident, the inspector believes the shoring was "inadequate," Erin Jones, a spokesperson with Houston Public Works, said. That means whatever temporary support system was in place while workers poured the concrete may not have been working properly and resulted in the collapse.

Jones said there are no concerns with the property's inspections or permitting, which is up-to-date. The building was issued a permit on Aug. 7, 2017, and has undergone several inspections, including two scheduled inspections related to concrete. The general contractor, Classic Construction, requested both of those inspections. Calls to the business were unanswered Monday afternoon.

Nine workers were hurt following the collapse, according HFD. Three of those victims went to Ben Taub Hospital. At least two victims were rescued in HFD baskets on the fifth floor.

HFD says none of the workers' injuries are life-threatening.

The building was cleared of workers and after about an hour, roads in the area reopened to traffic. While firefighters say another collapse is not likely, engineers will need to inspect the structural integrity of the building.

Several people are being treated by firefighters after the top floor collapsed in this building. North Fwy and Main Street are currently blocked. Not sure how extensive the injuries are at this time. This building is next to Pyramid Imports tile and flooring inc. @abc13houston pic.twitter.com/ae9yXFmbOK