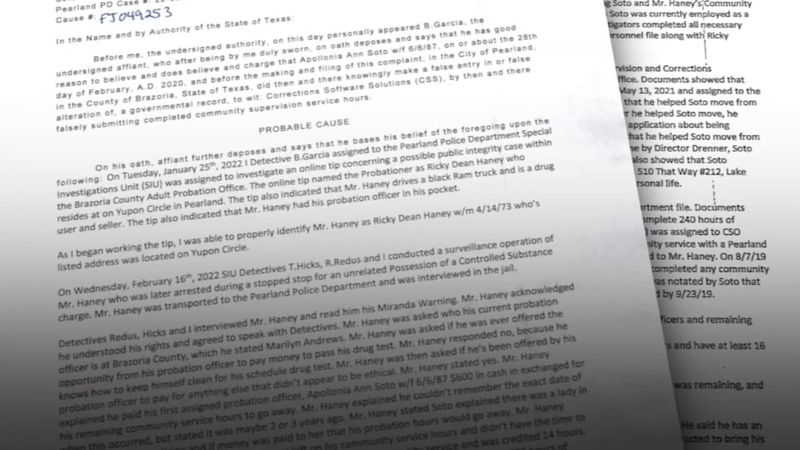 According to a probable cause document, Pearland police began an investigation after an online tip came in about a probationer named Ricky Haney having "his probation officer in his pocket."

The court document states in an interview, Haney told authorities he paid probation officer 34-year-old Apollonia Soto $600 in cash in exchange for his remaining community service hours to go away. Haney told investigators this happened two or three years ago.

According to the Brazoria County Sheriff's office, Soto was arrested on March 16 and was charged with tampering with a government record.

Haney also told investigators Soto gave him multiple community service forms to fill out and was told to use the name of a woman who works a Goodwill store in Pearland.

The probable cause report further states text messages exchanged between Haney and Soto show they have a friendship, which investigators say is improper between a probation officer and a probationer.

ABC13 spoke with Jennifer Bagley, the human resources administrator for the Brazoria County Community Supervision and Corrections Department, which oversees adult probation, along with the department's director Dr. Greg Dillion.

They confirmed Soto was terminated as of March 16, which is the same day she was arrested. They said they were unable to discuss her arrest but said she was terminated for "performance that was not aligned with policies and procedures."

They told ABC13 that Soto was supervising about 100 to 150 probationers.

Bagley and Dillion said there is no internal investigation into Soto's work and explained they have an ongoing process where files are reviewed consistently.

According to Bagley and Dillion, Soto worked for their department two different times. They said she worked for adult probation for about a year and eight months, from July 2019 to April 2021. She was rehired in May 2021 and was terminated in March 2022. They said during her tenure, no other issues came up that would have led to her being terminated.

ABC13 attempted to speak with Soto about the arrest Wednesday evening, but she declined to comment.