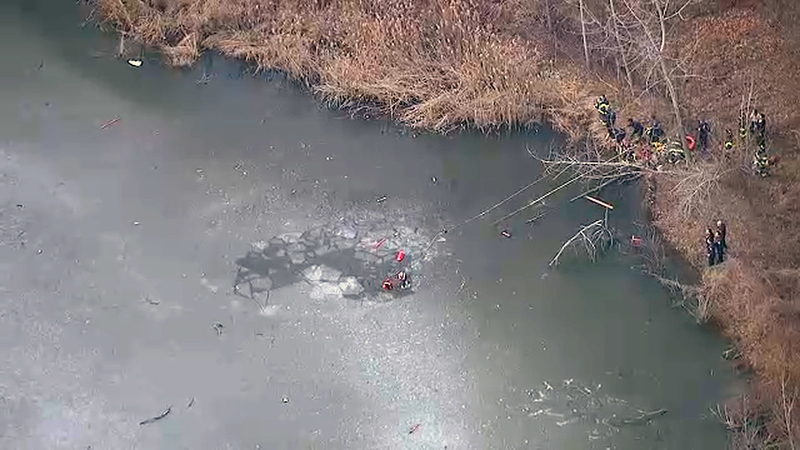 WOODHAVEN, Queens -- An 11-year-old boy died after falling through the ice at a freezing pond in Queens Tuesday. It happened after he pulled his friend to safety, but then fell in himself.

Officials said Anthony Perez and another child were walking on the frozen surface of Strack Pond in Forest Park at about 4:05 p.m., when he broke through and went into the water about 50 feet from the shore.

Firefighters did everything they could, barefoot and wearing just shorts and T-shirts. Two of them dove into the ice cold waters of the pond to search for the boy who had gone under, but they couldn't find him.

One of them shimmied out, got his bearings, and then focused on a figure under the water and pointed him out.

He dove back in, he and his partner punching through ice to get closer until they finally found him, but it was too late.

"There are signs around all these lakes in the city. We implore you, tell your children make sure they're aware," said FDNY Deputy Chief George Healy. "Today the temperature was well above freezing, the ice is not safe. It's not going to support your weight and it can have tragic consequences."

Even more tragic, police say Anthony died after saving a 12-year-old friend who himself had fallen through the ice. Anthony pulled him out, then fell in himself. The friend ran for help.

But by the time someone called 911, Anthony probably didn't have a chance, authorities say. Rescuers were there in minutes but there was nothing they could to save him. The two firefighters were treated for hypothermia.

Neighbor Kevin Orr knows the boy who survived who will carry this weight forever.

"I can't imagine that. For a young kid? Who knows? Who knows how he'll handle that. It's his friend," said Orr.