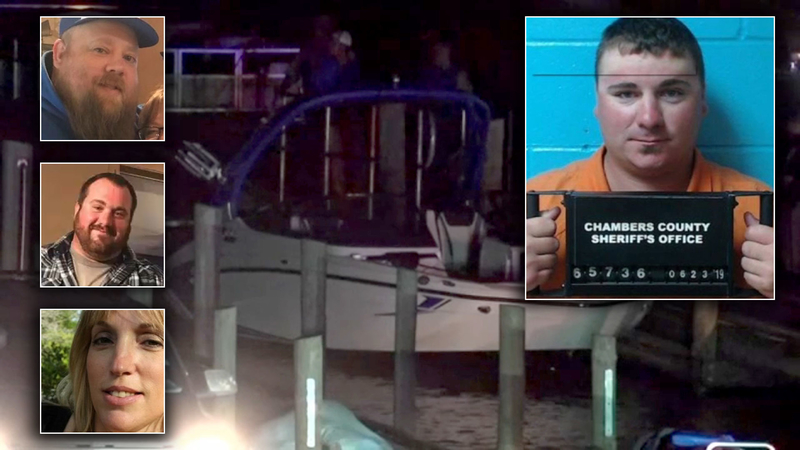 MONT BELVIEU, Texas (KTRK) -- One person has been charged in the boat collision that killed three people and injured several others in Chambers County.

Hawthorne says an ongoing investigation revealed a large ski boat struck a bass boat carrying seven people. Three of the seven on the bass boat died, including the driver.

Three people were taken by helicopter to the hospital, one person was taken by an ambulance and another was treated at the scene.

There were five people on the ski boat. Four of them suffered minor injuries.

The Chambers County Sheriff's Office released the names of the people who died in the crash.

Laura Kay Grant, 48, of Mont Belvieu, and William Robert Bowles, 36, of Baytown were pronounced dead by Justice of the Peace Precinct 6. Zachary Jackson Miles, 29 of Beach City, died at the hospital.

ABC13's Courtney Fischer also learned that this was the first time the ski boat was taken out on the water. It was brand new.

The sheriff said the location of this incident is the same location where another deadly accident happened a few years ago.

In news conference Monday afternoon, authorities said both boats were going 30 mph as they were coming around a bend. Both vessels tried to avoid a collision and over-corrected.

This led to the ski boat going over the fishing vessel. The crash happened in shallow water, and only one person was wearing a life vest.

No one in the ski boat had major injuries.

Follow Courtney Fischer on Twitter and Facebook.
Follow Tom Abrahams on Twitter and Facebook.
Report a correction or typo
Related topics:
chambers countyaccidentboat accident
Copyright © 2022 KTRK-TV. All Rights Reserved.
TOP STORIES
Daylight shows home destroyed after standoff with shooting suspect
What we know about man accused of shooting 3 HPD officers
Widow delivers heart-wrenching eulogy for NYPD detective
Suspect arrested after 30-minute chase ends on I-45 in Texas City
Rainy Monday and arctic cold front on the way after sunny weekend
5 people charged in connection with Pct. 5 corporal's murder
How many times can I reuse my N95 mask?
Show More
Decades after TV anchor disappears, convicted rapist denies connection
Driver dies after slamming into 18-wheeler's trailer on US-59
Woman shot in the shoulder during robbery set up in SW Houston
Prepare for a major closure at I-69 and 610 West Loop this weekend
Officers escort body of corporal killed in ambush to funeral home
More TOP STORIES News