Former President Bill Clinton looks up at his portrait at the Smithsonian Castle Building in Washington, April 24, 2006. (AP Photo)

The artist behind Bill Clinton's presidential portrait admits that he secretly included a direct reference to Monica Lewinsky within the painting.

ABC News reports that the portrait's creator, artist Nelson Shanks, revealed in an interview with Philadelphia Daily News that the painting "subtly" incorporated Monica Lewinsky -- a nod to the president's extramarital affair with a 22-year-old intern.

Shanks says he placed a mannequin in a blue dress to cast a shadow on the mantle while he was painting. However, the mannequin and the president were never in the room at the same time, he noted. The blue dress is a reference to the infamous "blue dress" related to the scandal.

"It is also a bit of a metaphor in that it represents a shadow on the office he held, or on him," Shanks told Philadelphia Daily News. 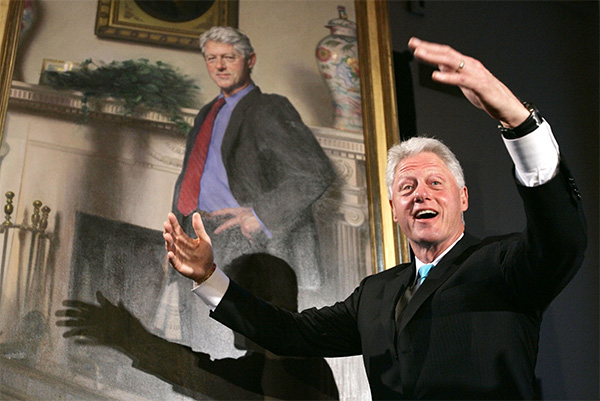 Former President Bill Clinton, gestures after the portraits of his wife Sen. Hillary Rodham Clinton and him were revealed, April 24, 2006, at the Smithsonian Castle Building.

Shanks is a renown portrait artist, having made them for Princess Diana, Pope John Paul II, Margaret Thatcher, and Ronald Reagan.

Describing the former president as "the most famous liar of all time," Shanks said that out of all those he immortalized into portraits, Clinton was the hardest to capture.

The artist went on to claim that the Clintons hate the portrait and want it removed from the National Portrait Gallery. However, a museum spokesperson told ABC News that they have not received any such request from the Clintons.

The same portrait also stirred controversy when it was first revealed in 2006 for the notable absence of Clinton's wedding ring.