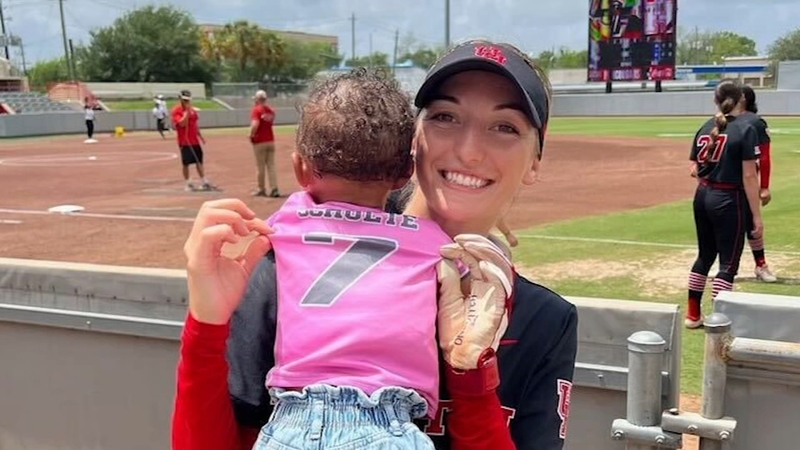 "There is no feeling like hitting a home run," Schulte told ABC13.

And the University of Houston softball slugger has experienced that home run feeling 13 times this season. But Schulte's blasts are different. They're Mom Bombs.

"This has been the hardest but also the best year I've ever had in school and softball," Schulte admitted. "I have so much purpose in my life right now."

That purpose is Schulte's daughter Rin - born in March of 2021. Despite having more eligibility, Schulte initially thought her college softball career was over when her journey as a mother began.

Instead, she's pulled off an incredible triple-play this season, by being a full-time student, standout athlete, and single mom.

"A lot of people told me it was selfish and irresponsible to come back," Schulte recalled. "But when it really came down to it, I know one day Rin's going to be so proud of me for being able to do it."

With Rin there to see just about every swing her Mom takes, Schulte has started 51 of UH's 53 games - leading the team in most offensive categories, including home runs. She was the winner of the 2021-22 DJ Hayden Award given to the student-athlete who has overcome significant obstacles in life, has a positive outlook, and pursues excellence despite obstacles.

"She has got me through so many tough moments," Schulte said about Rin. "Whether she knows it or not, she has been able to be there for me in those moments, and that is probably what I'll take away from it the most. I've never been so tired, but I've also never been so happy and content."

Schulte says there's no feeling like hitting a home run. But now, crossing the plate is not the only time she can enjoy the incredible emotions of coming home.