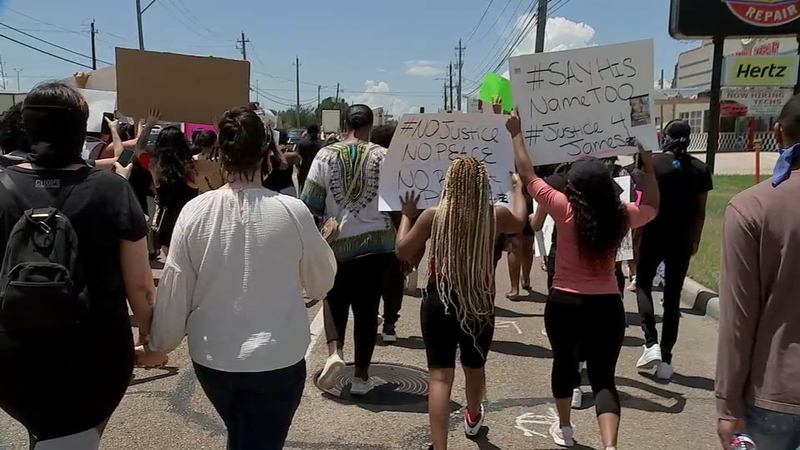 BAYTOWN, Texas (KTRK) -- Demonstrations and marches have become a near daily occurrence in cities across America in the wake of the death of George Floyd, and on Thursday, the city of Baytown was the setting for its own protest march.

The incident happened at the Baytown Market store Tuesday in the 2900 block of Market Street.

Officers pulled over a 23-year-old black man for a traffic violation. When officers handcuffed the man, two people in front of the store began to make comments about what was happening.

Skylar Gilmore, 24, and Isaiah Phillips, 23, questioned the officers' actions, and were later arrested for disorderly conduct-language, for their public use of profanities. Gilmore was also accused of interfering with a public servant. The officer could be heard cursing in the video as well.

In the video, Gilmore was seen being pushed to the ground by the officer. The video appears to show Gilmore getting hit by the officer's leg as well. Meanwhile, Phillips was pushed to the trunk of the car and handcuffed. His backpack was also pulled from him.

Both Gilmore and Phillips marched in Thursday's demonstration, along with the family of Pamela Turner, a 44-year-old Baytown woman who was fatally shot by a Baytown police officer 13 months ago.

It happened during an attempted arrest. The officer remains with the department, but is still on administrative duty.

The Turner family is represented by civil rights attorney Benjamin Crump, who also represents the family of George Floyd.

Baytown P.D. issued the following statement:
"On June 2nd our officers conducted a traffic stop of a vehicle in the parking lot of the Baytown Market Convenience Store located in the 2900 block of Market Street. During that stop the driver of the vehicle, 23-year-old Jostin Moore of Baytown, was arrested for traffic violations and an outstanding warrant out of Deer Park. During the course of the stop, a small crowd made up of several of Mr. Moore's associates began to gather outside the store. Two members of that group, 24-year-old Skylar Gilmore and 23-year-old Isaiah Phillips both of Baytown, were subsequently arrested as well for Disorderly Conduct-Language for their public use of profanities during the incident. Mr. Gilmore was also charged with Interfering with Public Duties through the Harris County District Attorney's Office for his actions during his arrest. Baytown Police Chief Dougherty has referred the incident to our Internal Affairs Division to conduct a complete and thorough review of the incident."