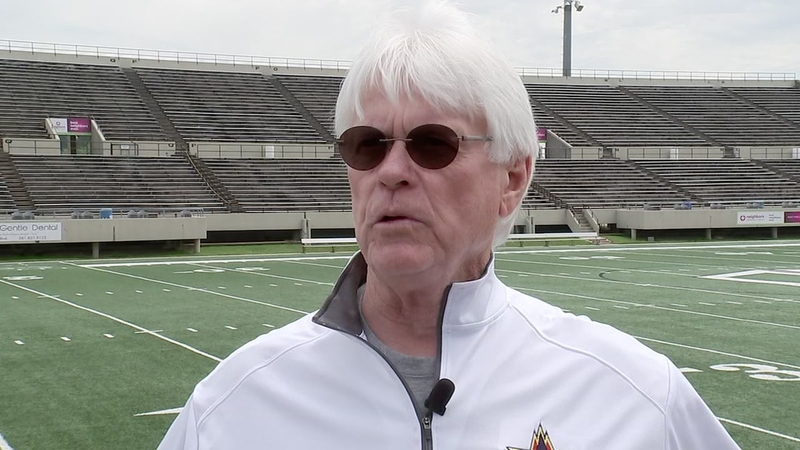 "We had this place was packed. What an atmosphere. It was tremendous," Olin recalled.

It was tremendous, and for 17 years it was different. When everybody else in Texas lined up to run the ball, Coach Olin's Ganders took flight.

"You don't ever see anybody lining up and practicing wishbone or wing T. But if you throw the ball, you'll see kids out there wanting to be a quarterback," Olin said.

For nearly two decades, few schools in the country had better offenses or better quarterbacks. From Jermain Alfred to El Roberson and Drew Tate, Clint Stoerner and Brian Johnson. All starters and stars in big time college football.

Olin remembered the successful players, saying, "Having those kids come one right after another was because of the system we had in place. People always wanted to know who's the next quarterback at Baytown Lee."

Olin made sure it started with Optimist league football and middle school ball in Baytown.

"We visited all the junior highs continually and we got things going from that level up," he said.

Olin changed lives at Lee and he changed football in the Lone Star State, when coaching friends in California and Illinois helped him introduce Texas to seven-on-seven football in 1996.

"We charged the kids an exorbitant amount at that time, it was $5 a person. We gave medals out when you won. First place got a medal," he remembered.

More than two decades later, the incredible impact of seven-on-seven plays out across the state with high flying, high octane football. Coach misses the old days, before personal coaches and elite teams outside the high school.

"I wanted my kids, my quarterbacks to be with me, and they didn't need to go some other place. And that's just the way it worked," Olin said.

It still works with Coach Olin's leadership in the Bayou Bowl, the annual all-star game that airs on ABC13.

Still providing opportunities. Another generation of players in Texas joins the grand tradition at Baytown Lee.