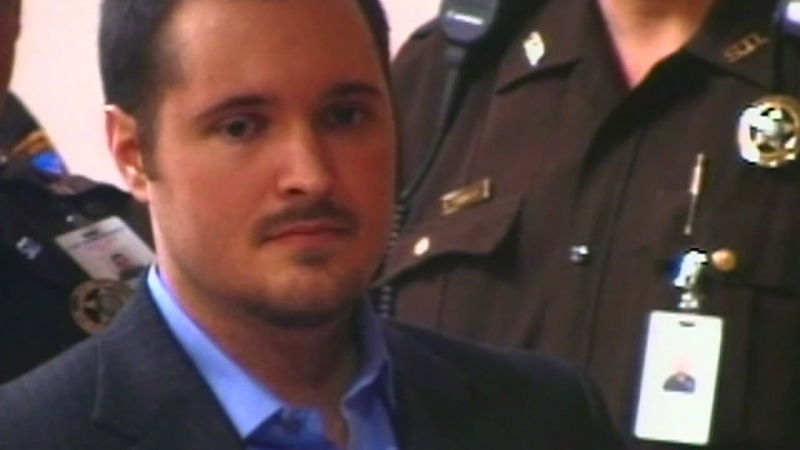 SUGAR LAND, Texas (KTRK) -- About 40 minutes before Bart Whitaker was scheduled to be executed, the governor spoke.

Texas Gov. Greg Abbott has chosen to commute the execution of the Sugar Land man convicted in the 2003 murders of his mother and brother.

Abbott's actions came down to the wire after an unusual move by the Texas Board of Pardons and Paroles, which recommended clemency in this case.

Its decision, in part, was based on the pleas from Kent Whitaker, who met this morning with his son for what might have been the very last time.

Whitaker was even served his last meal of chicken enchiladas, rice, beans and vegetables.

By all appearances, the execution looked as if it would go forward. But now he will spend the rest of his life in prison, without the possibility of parole.

Kent Whitaker threw kisses and embraced friends outside the Walls Unit in Huntsville after recalling the moment he learned his son's life had been spared.

"At that point I put it on speaker and let everybody hear it, and the whole room erupted. It was overpowering. So grateful. So grateful," Whitaker told reporters. "I want to thank everyone. In particular, I want to thank the governor."

Here is what Whitaker said to prison officials:

I'm thankful for this decision, not for me but for my dad. Whatever punishment I might have received or will receive will be just. I deserve any punishment for my crimes, but my dad did nothing wrong. The system worked for him today and I will do my best to uphold my end of the bargain.

Not everyone was so supportive of Abbott's choice to commute Whitaker's execution.

Death was the correct decision, said one of the jurors. She is disappointed but not surprised by what the governor did.

"We came to the conclusion that Bart Whitaker was a master manipulator. He manipulated people into killing for him. The death sentence was the correct sentence. I also feel he manipulated the parole board and the governor," said the juror, who asked not to be identified.

Fort Bend County District Attorney John Healey told Eyewitness News, "I know the sentence of death was the appropriate decision, but I do respect the Governor's authority."

Thursday night, Whitaker was being moved to an inmate processing center for re-classification within the Texas Department of Criminal Justice, just hours after his father thought he was saying his final goodbye.

"We touched hands through the glass and said our goodbyes and we left to come here and he left to be transported to the Walls Unit," said Kent Whitaker.

The following statement was issued from the Governor's office:

"As a former trial court judge, Texas Supreme Court Justice and Attorney General involved in prosecuting some of the most notorious criminals in Texas, I have the utmost regard for the role that juries and judges play in our legal system. The role of the Governor is not to second-guess the court process or re-evaluate the law and evidence. Instead, the Governor's role under the Constitution is distinct from the judicial function. The Governor's role is to consider recommendations by the Texas Board of Pardons and Paroles, and view matters through a lens broader than the facts and law applied to a single case. That is particularly important in death penalty cases.

"In just over three years as Governor, I have allowed 30 executions. I have not granted a commutation of a death sentence until now, for reasons I here explain.

"The murders of Mr. Whitaker's mother and brother are reprehensible. The crime deserves severe punishment for the criminals who killed them. The recommendation of the Texas Board of Pardons and Paroles, and my action on it, ensures Mr. Whitaker will never be released from prison.

"The decision of the Texas Board of Pardons and Paroles is supported by the totality of circumstances in this case. The person who fired the gun that killed the victims did not receive the death penalty, but Mr. Whitaker, who did not fire the gun, did get the death penalty. That factor alone may not warrant commutation for someone like Mr. Whitaker who recruited others to commit murder. Additional factors make the decision more complex.

"Mr. Whitaker's father, who survived the attempt on his life, passionately opposes the execution of his son. Mr. Whitaker's father insists that he would be victimized again if the state put to death his last remaining immediate family member. Also, Mr. Whitaker voluntarily and forever waived any and all claims to parole in exchange for a commutation of his sentence from death to life without the possibility of parole. Moreover, the Texas Board of Pardons and Paroles unanimously voted for commutation. The totality of these factors warrants a commutation of Mr. Whitaker's death sentence to life in prison without the possibility of parole. Mr. Whitaker must spend the remainder of his life behind bars as punishment for this heinous crime."