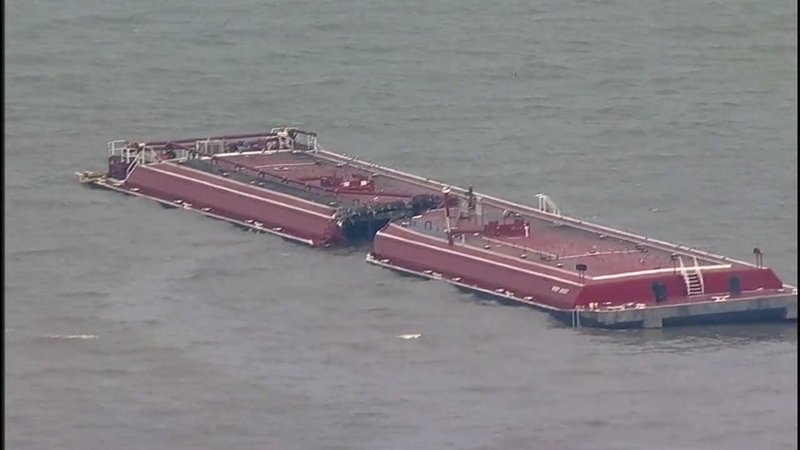 HOUSTON, Texas (KTRK) -- A barge carrying 25,000 barrels of Reformate is leaking the gas product after crashing with a tanker in the Houston Ship Channel.

Port officials said the crash happened around 3:30 p.m. Friday near Light 73 in the Bayport Channel.

AVOID THE COASTLINE: Officials warn of chemical odor found in 11 communities
The impact of the collision was so severe, it almost sliced the barge in half. According to the Coast Guard, the tanker, Genesis River, crashed into a tug pushing two barges. One capsized. The other was left with a huge gash in it.

"It's unbelievable with all the radar and stuff, you would think this wouldn't happen," said John Harris, who was among a dozen or so residents who gathered at Golden Acres Park to try to see what happened.

Both barges were hauling 25,000 barrels of the gasoline blend stock Reformate, said a Port of Houston spokesperson. It immediately started spilling from the damaged barge and a sheen started inching closer to land.

Residents from surrounding communities complained of a gas odor.

Air quality monitors were reading levels in bay communities Friday night. Tests turned up nothing abnormal. The water was of another concern. The floating gas product is toxic to water life.

"We need to know what the dangers are in the water. If there's gas, we can't come here (the beach)," Acosta said. "I have children and grandchildren."

In addition to a Coast Guard helicopter and boat, a Port Houston Fire Department fire boat and oil spill response were deployed. There were no injuries.