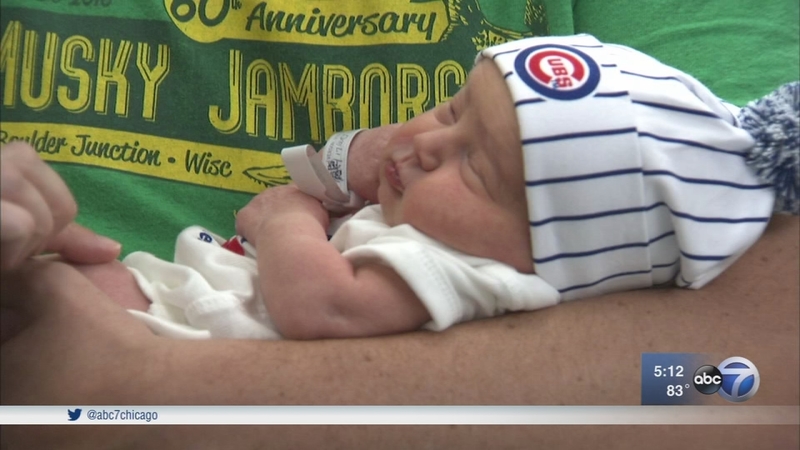 Theo, who was born July 17, was one of the babies conceived under the stars that shined when the Cubs finally won it all on Nov. 2, 2016.

"I think we were hopeful that it would work out that way, and when we found out that we were pregnant, it just made it that much more special," said Theo's mom, Erin Hattinger, of Barrington.

Hospital staff said baby booms ebb and flow, but when something overwhelming happens - such as the 2003 North American blackout -- there are noticeable waves.

"I think that there is definitely a bit of luck that they all got pregnant right around the World Series," said Dr. Melissa Dennis, an ob-gyn at Advocate Illinois Masonic Medical Center.

Dennis said if a woman consults her caregiver early in a pregnancy a conception date can be determined to within a 2-3 day window.

Baby boy Addison was born July 16. His parents said they didn't plan this. If the baby was a girl, she would have been Wrigley.

Addison's mom, Natalie Pelnar, said they found out the day after the Cubs won the World Series that she was pregnant.

"It was a huge moment for us to celebrate," said Pelnar, of Palatine.

Dad Joe Pelnar said he looks forward to taking little Addison to Cubs games when he gets a little bit older. "It's a dream come true," dad said.

Little Iker -- born on Monday -- basked in the glow of being a World Series baby, even if his father said his name means soccer player.

As summer and another pennant race looms, maybe the maternity ward will be busy once again, nine months from now.