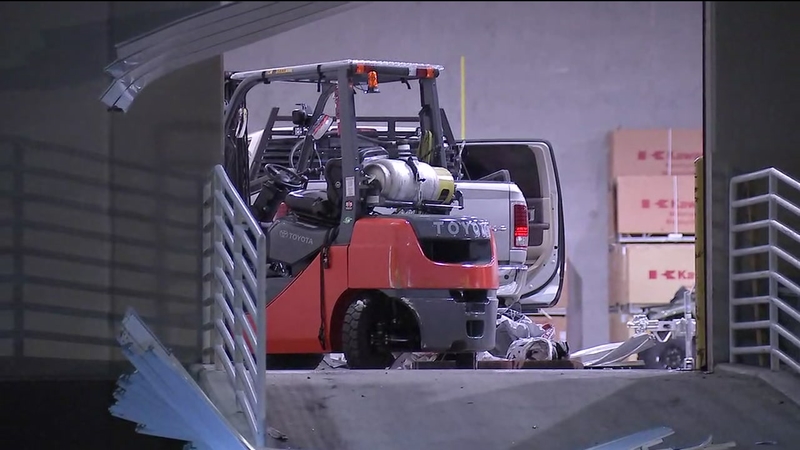 HOUSTON, Texas (KTRK) -- Houston police say one of the suspects involved in a smash and grab at an electronics warehouse in west Houston Monday morning didn't go down without a fight.

Houston police are responding to a smash and grab at an electronics warehouse in West Houston. More on #Abc13 at 4:30. pic.twitter.com/ireSrZetrk

Authorities say they were called out to the scene on Glenmont near the Westpark Tollway around 3 a.m. after the alarm company heard loud crashing and tires squealing.

As officers arrived, they were passed by two or three speeding motorcycles.

One of them got away. The second suspect fled to Gulfton and Chimney Rock, where he lost control and crashed.

Two other suspects ran, but one of them was taken into custody immediately.

A perimeter was set up and officers used a helicopter and K9 unit to track down the second suspect who fled.

Police say the man jumped on top of a container and refused to come down. He eventually jumped off and ran again, but the K9 caught up with him, biting him on the leg.

The suspect then tried to pull the K9 with him over a fence. Officers used a Taser on the suspect, who managed to climb over the fence and keep running.

The K9 followed him and that's when the suspect started to attack the dog.

During the fight, the K9 bit his handler on the leg. The handler will need a couple of stitches.

The dog was not hurt.

You can still see the truck inside. More on #Abc13 at 4:30. pic.twitter.com/LZJPJCsI2F