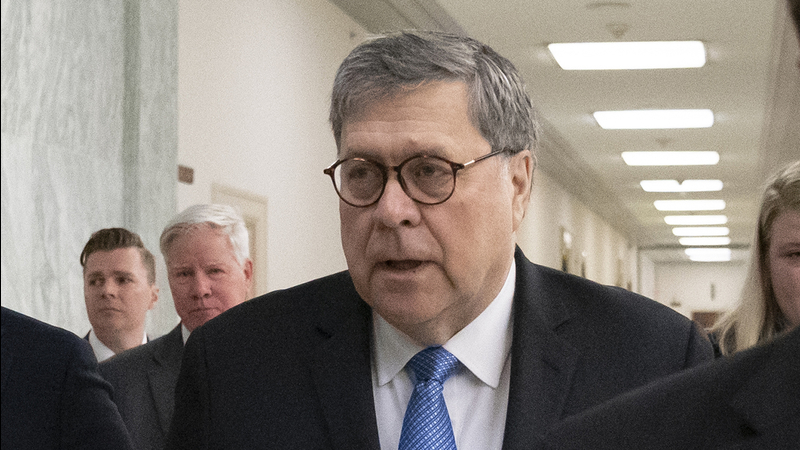 Attorney General William Barr is defending his decision to send a letter to Congress detailing special counsel Robert Mueller's principal conclusions because the public would not have tolerated waiting weeks for information.

Barr is testifying before a House appropriations subcommittee.

Democrats have raised questions about how Barr was so quickly able to boil down Mueller's report into four pages.

Barr says a redacted version of Mueller's report will be made public within a week.

He says Mueller wasn't involved in preparing the letter to Congress because it was "my letter."

Attorney General William Barr says he had a general sense of the Russia investigation's findings weeks before it concluded.

Barr says he "had an inkling" of the findings after meeting with special counsel Robert Mueller about three weeks before Mueller turned in his final report. Barr says Mueller's thinking was "not a mystery" to Deputy Attorney General Rod Rosenstein and other senior Justice Department leaders who had been supervising the probe for nearly two years.

Barr is responding to questions from House Democrats about how he reviewed Mueller's nearly 400-page report and released a letter laying out its principal findings within two days. Barr says he worked closely with Rosenstein in authoring the letter. He says he expects to release a redacted version of the report "within a week."

RELATED: Where the investigations related to President Donald Trump stand
___

Attorney General William Barr says he will release a redacted version of special counsel Robert Mueller's report on the Russia investigation within a week.

Barr is testifying before a House appropriations subcommittee Tuesday.

He says Mueller's report will have portions redacted but they would be color-coded to indicate why the information could not be made public.

Mueller concluded his investigation in late March and submitted a nearly 400-page confidential report. Barr sent a letter to Congress with Mueller's "principal conclusions." Barr said Mueller was given the opportunity to review that letter but declined to do so.

Barr says grand jury information, details that could reveal confidential intelligence sources and information that would interfere with ongoing cases will be redacted.

The chairman of a House appropriations subcommittee says it would be a serious blow to democracy if special counsel Robert Mueller's full report on the Russia investigation is not fully made public.

Attorney General William Barr is testifying before the subcommittee on Tuesday.

Mueller concluded his investigation in late March and turned over a nearly 400-page report to Barr. Two days later, the attorney general then sent the four-page document to Congress.

The Justice Department has said a redacted version of Mueller's report will be made public in mid-April.

Serrano said Americans have been "left with many unanswered questions" about Mueller's investigation.

Attorney General William Barr is facing congressional lawmakers for the first time since receiving the special counsel's report on the Russia investigation.

The Justice Department is preparing to release within days a redacted version of Mueller's report into potential ties between the Trump campaign and Russia.

Barr said in a four-page summary of Mueller's main conclusions that Mueller didn't find a criminal conspiracy between the campaign and the Kremlin.

The attorney general has also said that Mueller did not reach a conclusion on whether the president obstructed justice. Barr said he and Deputy Attorney General Rod Rosenstein decided the evidence was insufficient to establish obstruction.