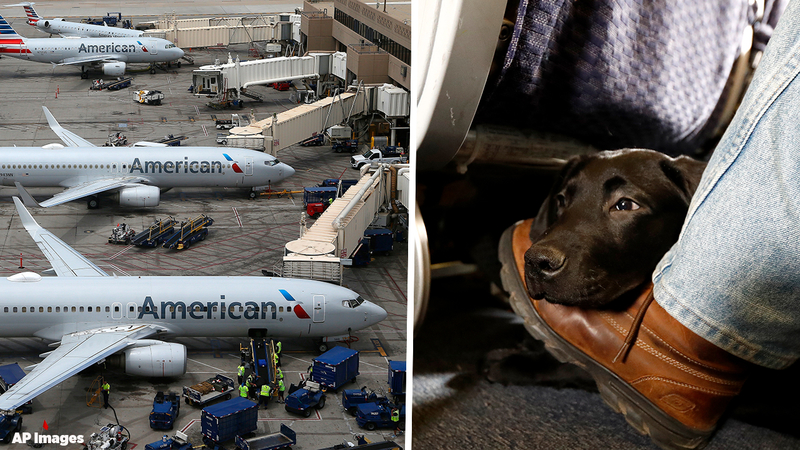 HOUSTON, Texas (KTRK) -- One week after an American Airlines flight attendant was bit by an emotional support dog, the Department of Transportation tells ABC13 they are now making plans to tighten regulations when it comes to those animals.

The incident happened on a July 22 Envoy flight, which is operated by American Airlines, that was departing from Dallas/Ft.Worth en route for Piedmont Triad.

According to the airline, the attendant was examined by medical personnel upon arrival at Piedmont Triad, but did not require any treatment. The attendant was cleared to return to DFW and upon returning, received five stitches.

"As much as we want to have our dogs with us: Don't," said Hamid "HP" Parvizian, CEO of Sit means Sit Houston. "Think about those who actually need the service."

Parvizian is a professional dog trainer and tells ABC13 the process of getting an animal certified for emotional support is way too easy and, in his opinion, needs more training regulations.

The Association of Flight Attendants released a statement in response to the incident, demanding the Department of Justice take action:

"What happened on yesterday's American Airlines flight is completely unacceptable and inexcusable. For years, AFA has supported the role trained animals can provide to passengers in the cabin, but we have also called for action in regards to setting standards for emotional support animals. We need the Department of Transportation to take action now, so events like the one that happened yesterday do not continue to occur on our planes. This is fundamentally about maintaining safety, health and security for passengers and crew, while ensuring accessibility for those who need it."

ABC13 reached out to the Department of Transportation regarding the Association of Flight Attendants' statement and received this response:

DOT is aware of the news reports of this incident. Air travel should be safe for passengers and airline employees and accessible for all passengers. The Department plans to issue a Notice of Proposed Rulemaking (NPRM) on Service Animals later this year. The NPRM would address, among other things, the appropriate definition of a service animal and include safeguards to ensure safety and reduce the likelihood that passengers wishing to travel with their pets on aircraft will be able to falsely claim their pets are service animals.

Parvisian explains his dog training business receives about a dozen calls per month from people requesting emotional support certification for their pet, but he turns away the majority of the clients because he believes they are looking for loopholes to travel with their pet.

"This loophole started getting exposed and more and more people started hearing about it," he said. "Now everybody wants to be able to fly with their dog."

As for more regulation, Parvisian says restricting access to purchasing certifications and requiring specific training for the animals are two things he would like to see implemented.