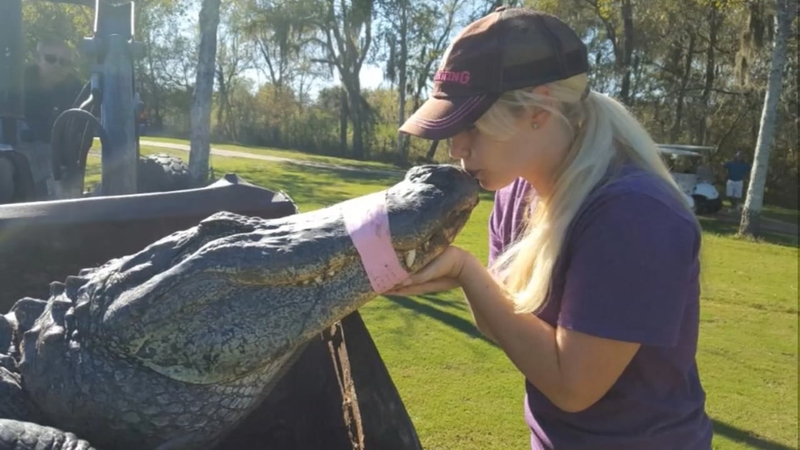 "We've always had them, but nothing like this size," says Lance Lopez with the River Pointe Golf Club.

"It's gotten to the point where it's gotten too comfortable. People getting too close, and we don't want anything bad to happen."

So they called in the Gator Squad.

"The report was golfers weren't being too nice to him, golfers were getting too close to him and he was too big and they were just uncomfortable with the whole situation," says Christy Kroboth.

You might remember Christy Kroboth from when she wrangled in another 12 footer at the First Colony Commons Shopping Center in Sugar Land. They named that 800-pounder Godzilla. They named this one Chubs.

"I was able to walk up to him, put a rope on him, he went into the death roll thing, tried to jump in the water, tried to take me for a little swim but all in all we were able to pull him out, pull him back on shore, calm him down."

They used a tractor to get him off the golf course and into the back of their truck. He only has one eye, so they can't release him back into the wild. Instead, they'll take him to a farm in El Campo where he'll join Godzilla and more of his scaly buddies.
Related topics:
richmondgolfalligator
Copyright © 2022 KTRK-TV. All Rights Reserved.
RELATED
VIDEO: Huge gator captured outside Sugar Land shopping center
TOP STORIES
Texas man said it was 'time to kill' election worker, records say
Laundrie claimed responsibility for Petito's death in notebook: FBI
Bundle up! Clear and cold night ahead
Bodies of 2 men found in apparent murder-suicide, HPD says
2 shot, 1 hit in head during home invasion on Houston's East End
Driver plows into hydrant, leading to NW Houston main break
Is is too late for the Ike Dike to be built?
Show More
Missing woman's cold case solved after car pulled from Brazos River
US confirmed 1st COVID case 2 years ago today
Police looking for 28-year-old in connection with teen's abduction
High school student attacked in his family's driveway in Richmond
Louie Anderson, Emmy-winning comedian, dies at 68
More TOP STORIES News