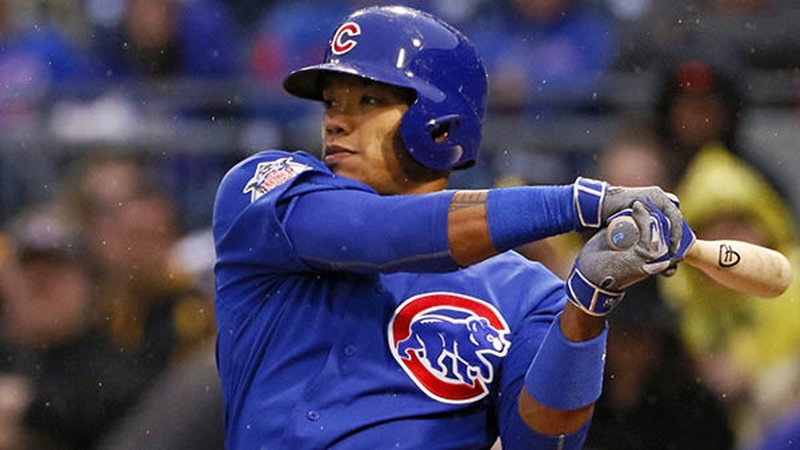 "The first time I was physically mistreated by my spouse, I was in shock. I couldn't wrap my head around what just happened...Why did he get so angry? What did I do for him to want to put his hands on me?" Reidy-Russell said in the post.

The Major League Baseball Players Association released the following statement Friday on behalf of Russell:
"These allegations are completely false. I made that clear to Major League Baseball last year and reiterated it to the Cubs today. I'm confident any full and fair investigation will fully exonerate me. The protection of my children is foremost in my mind so I will have no further comment."

Lester Munson, a legal sports journalist, believes her story is well thought out, detailed and believable.

"I must say that her statement is among the more compelling and persuasive statements I have seen as I have reported on these events over the last 25 years," Munson said. "Her language is so forceful. It has such detail that you really begin to think there's no question that all of this happened."

In the blog, Reidy-Russell goes on to accuse Russell of several affairs, intimidating her with personal force, destroying her things and threatening to send her and their son home to her parents. The reason for 24-year-old Addison's Russell's alleged abuse?

"One of his favorite excuses was that he was 'young' & he's still learning how to live right..." she wrote.

Reidy-Russell wrote about seeing Russell about a month after leaving him. It was a visit so he could see his son. She said the visit was a nightmare.

Allegations against Russell first surfaced last year after his then-wife posted on social media and accused him of cheating on her. Someone identified as a friend to Melisa commented on the post and accused him of physically abusing her.

The MLB launched an investigation after the social media comment. In response to the allegation, Russell said in a statement last year, "Any allegation I have abused my wife is false and hurtful. For the well-being of my family, I'll have no further comment."

After the initial allegations, the Cubs sent Russell home to deal with his family situation. The MLB never suspended him.

"I would think at a minimum he's going to be suspended," Munson said Friday morning. "I don't think professional sports can withstand this kind of allegation without taking action. There was a time in the sports industry when this kind of thing would be tossed aside. Those days are gone. Something's going to have to give here."

Russell was not in the Cubs starting lineup for their Friday game against the Chicago White Sox and was not at the ballpark. He will be on leave for at least a week.

"Last year this was a third-party accusation on social media. Now this is a direct accusation from the accuser, from the potential victim," Cubs President Theo Epstein said.

"It is in the league's court to do the investigation. There's a process established for this and we intend to cooperate with the process and let the league do their job," Cubs Chairman Tom Ricketts said.

Advocates for the abused are asking the MLB to take a stand.

"I do think the Chicago Cubs and Major League Baseball need to send a message that they do not tolerate offenders in their organization, they don't tolerate abuse by their players of anyone in the community," said Chicago Metropolitan Battered Women's Network Executive Director Amanda Pyron.

Fans are supporting the process.

"Regardless of who you are and what your background is, and especially if you're a professional athlete or not, everyone should be held accountable for a situation like that," said Cubs fan Ryan Desiderio.

"It's sad to see him put on administrative leave, but you know what? It shouldn't be tolerated no matter where, no matter what position you hold," added Cubs fan Norma Rivera.

Melisa had not commented publicly on the abuse allegations until Wednesday. They divorced last year.

The MLB issued this statement Friday:

"Major League Baseball takes all allegations of Domestic Violence seriously. When the allegations against Addison Russell became public on June 7, 2017, the Commissioner's Office's Department of Investigations immediately commenced an investigation. Melisa Russell declined to participate in the investigation at that time. Our investigation of this matter has remained open and we have continued our efforts to gather information.

"With the new details revealed in today's blog post by Ms. Russell, Mr. Russell has been placed on Administrative Leave in accordance with the Joint MLB-MLBPA Domestic Violence Policy. We are hopeful that this new information will allow us to complete the investigation as promptly as possible."

The Cubs issued this statement Friday: