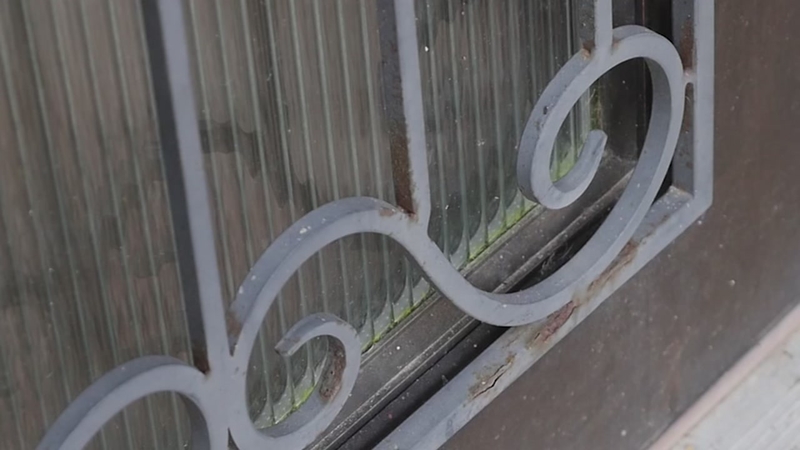 HOUSTON (KTRK) -- Anthony and Jessica Gruetzmacher were just one of the 80,000 Texas families who moved into a DR Horton home in Texas in the last ten years. But the Alvin couple said they wish they hadn't accepted the keys. Two years after they closed on the 2500 square foot home, they tell ABC13 they're still fighting to get repairs the builder promised within days of their 2014 closing.

They showed us issues they found before closing and still exist: cracked molding, a leaky roof, doors hung crooked and a 2 year old 'premium' upgraded front door that desperately needs attention. "It looks terrible. It's rusted out in places," Gruetzmacher told us in front of his home.

After that it was up to his roof to find screws protruding through shingles, shingles that weren't secured and dips from broken or sagging rafters where water pools. Anthony tells ABC13 an independent roof inspector told him, "there's so many issues with this roof, it needs to be replaced."

After months of requests and no progress in 2014 & 2015, the Gruetzmachers hired an attorney and went to mediation. The company offered $5,000 and a promise to fix the repairs.

The couple refused and the issues still remain.

ABC13 found the Gruetzmachers as we worked with ABC News to investigate the reasons it can be so tough to fight builders. Almost all new home contracts mandate mediation and arbitration - oftentimes with mediators and arbitrators hoping to get more work with homebuilders.

ABC News' Brian Ross weighed in telling us these mandatory arbitration clauses, "can't be appealed, the outcome is kept secret and these arbitrators work mostly with home construction industry - so they know which side their bread is buttered on."

According to the company DR Horton is the largest builder in Houston with 10% market share and over 2,500 homes closed. The Fort Worth-based company has an A+ rating with the Better Business Bureau - having closed 243 BBB cases in the last 12 months.

At first the company told us, "We are aware of Mr. Gruetzmacher's concerns and have reached out on several occasions to schedule the repairs. Unfortunately, our attempts remain unacknowledged. D.R. Horton is dedicated to superior customer service and providing families with quality homes and neighborhoods in the Houston area and
throughout the United States. Taking care of our homeowners both during the construction of their new home and after closing is our utmost priority."

But just days after that, Anthony got a surprise call from his attorney. DR Horton had dramatically changed course and offered to buy his home completely. He didn't want to discuss the price, but says it was enough for he and his wife to seriously consider. He and his wife have since counter-offered and are waiting for a response.