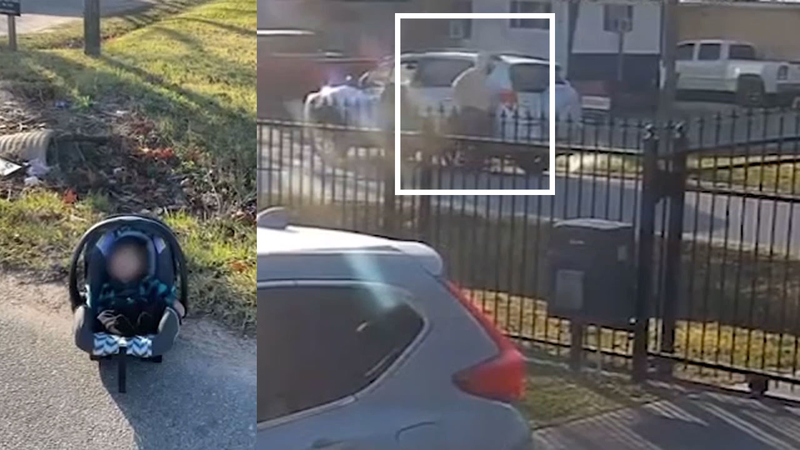 HOUSTON, Texas (KTRK) -- Neighbors on Houston's north side are thanking an Amazon delivery driver for helping to find a baby that was abandoned after an apparent carjacking.

Police said they responded to a stolen car and kidnapping on Monday in the 300 block of Sunnyside.

Around the same time, a home surveillance camera captured a man leaving a baby in a newborn carrier on the side of the road in the 400 block of New Haven Drive, less than a mile away.

Amazon driver Juan Carlos Flores said he spotted the baby in the carrier and realized something wasn't right.

"When I saw that baby, I wanted to cry," said Flores.

You need to meet Juan Carlos Flores, the delivery driver who spotted a newborn baby inside a carrier on the side of a north Houston street last week. The baby had been inside a vehicle that was stolen and the thief later abandoned the child.

He went to the nearest neighbor to ask if the baby was left outside.

The homeowner, who asked to remain nameless, told ABC13 that when he went outside, he saw the baby carrier on the ground. He immediately took the car seat indoors, covered the baby and called police.

"How could someone have a heart to leave the child on the side of the road?" Flores said.
WATCH: Neighbors' surveillance cameras capture the moment the baby was dropped off
EMBED More News Videos

Amazon driver Juan Flores said he noticed the baby while making his daily rounds. He immediately notified a nearby homeowner who cared for the baby until police arrived with the mother of the child.

Flores returned to his rounds, and later he said he saw police searching for the baby nearby. He said he led officers back to the house where the neighbor was caring for the child.

Additional officers showed up to the scene nearly three minutes later and reunited the infant with the mother.

Police said the driver who dropped the baby off was believed to be the suspect of a carjacking in the 300 block of Sunnyside.

"Units in route to a robbery of the vehicle. On the call, she said the child was in the vehicle," authorities said on police audio from Broadcastify.

Officers in the police audio also said the mother was trying to track an iPhone that was also in the vehicle, in hopes of finding the vehicle and the child together.

Then police received a welfare check call for an infant between 4-6 months old in the 400 block of New Haven Drive.

"It showed the baby getting dropped off, and the baby was there for about 20 minutes, and there were about six vehicles that drove by, and nobody saw," Garcia said. "It was also trash day that day, so we wouldn't have realized something was there on the corner."

Garcia said she turned the video into police. HPD is still searching for the suspect.

"We were a little shocked," Garcia said. "Just because we felt like somebody was definitely watching over that baby. And, being a mom, I could only imagine what the mom was going through."
Report a correction or typo
Related topics:
houstonbaby rescuedchild abandonedbabycarcarjacking
Copyright © 2021 KTRK-TV. All Rights Reserved.
More Videos
From CNN Newsource affiliates
TOP STORIES