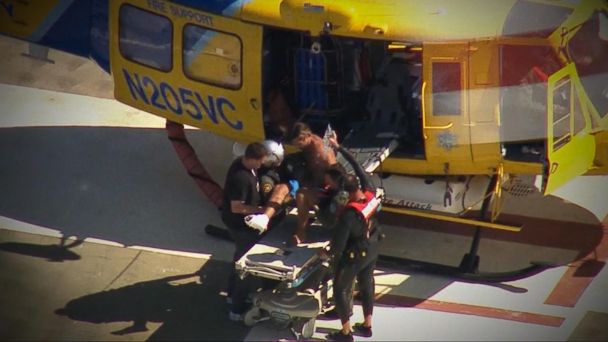 A shark -- possibly a hammerhead -- attacked a kayaker at a beach Saturday in Malibu, California, biting his foot as he was trying to get to shore, officials said.

The attack occurred about a mile off shore near Deer Creek Road, just south of Point Mugu, according to officials. Kyle Hudgins, who witnessed the attack, said four hammerhead sharks suddenly started circling them while they were fishing.

"He had his foot on the side and he just got bit," Hudgins said.

The kayaker suffered cuts to his foot, but was able to kayak himself to shore, said Ventura County Fire Capt. Ron Oatman. The victim, identified by ABC station KABC-TV in Los Angeles as 29-year-old Dylan Marks, was then air lifted to a hospital, Oatman said.

"He was conscious and in good spirits," said Oatman, who added shark attacks are unusual in Ventura County.

"Definitely not something we see a lot, even though we have a lot of coastline along here, we don't see a lot of shark incidents," he said.