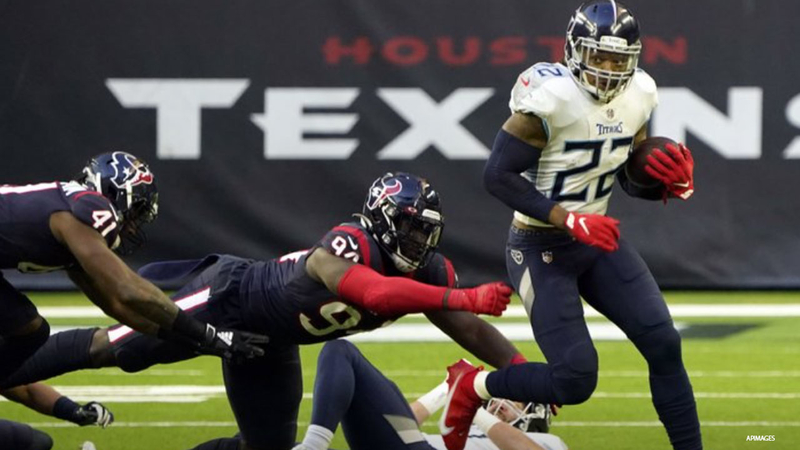 Texans end season with another loss

HOUSTON, Texas -- The Tennessee Titans won the AFC South on Sunday. All it took was Derrick Henry surpassing 2,000 yards rushing and rookie Sam Sloman's 37-yard field goal that bounced off the upright and through for a 41-38 victory over the Houston Texans.

Henry ran for a career-high 250 yards in the victory that gave Tennessee (11-5) its first AFC South title since 2008 and is the fifth straight loss for the Texans (4-12). The Titans needed the air game to set up Sloman's winner, though: a 52-yard reception by A.J. Brown moments after a 51-yard field goal by Houston tied it with 18 seconds left.

Tennessee will host Baltimore (11-5) next weekend.

Henry finished the regular season with a franchise-record 2,027 yards rushing to become the eighth player in NFL history to run for 2,000 yards. He passed Chris Johnson, who had 2,006 yards in 2009.

Henry had touchdown runs of 52 and 6 yards in his third straight 200-yard rushing game against the Texans.

Tennessee had a 3-point lead early in the fourth quarter when Tannehill was sacked on fourth-and-11 to give the Texans the ball at their 37. Houston took its first lead when Deshaun Watson found Pharaoh Brown on a 7-yard pass that made it 35-31 with about 10 minutes remaining.

The Titans then capped a long drive with a 5-yard TD run by Ryan Tannehill with less than two minutes remaining. Henry reached 2,000 yards with a 6-yard run early in that drive.

Tannehill threw for 216 yards and a touchdown and ran for two more scores. Watson threw for 365 yards and three touchdowns with an interception.

A 6-yard run by Henry extended the lead to 24-9 early in the third quarter. But Watson connected with Brandin Cooks on a 38-yard TD pass to cut the lead to 24-15 after a missed extra point.

A 5-yard scramble by Tannehill made it 31-15 later in the third. Henry had a 45-yard run two plays earlier to set up the score.

Cooks grabbed a 20-yard TD reception on Houston's next drive, but the 2-point conversion failed, leaving Houston down 31-21. Henry fumbled on Tennessee's next drive at its 28. Watson's 1-yard TD pass to David Johnson cut the lead to 31-28 late in the third.

Houston added a field goal just before halftime to get within 17-9.

Titans: G Roger Saffold left in the third quarter with an ankle injury and didn't return.