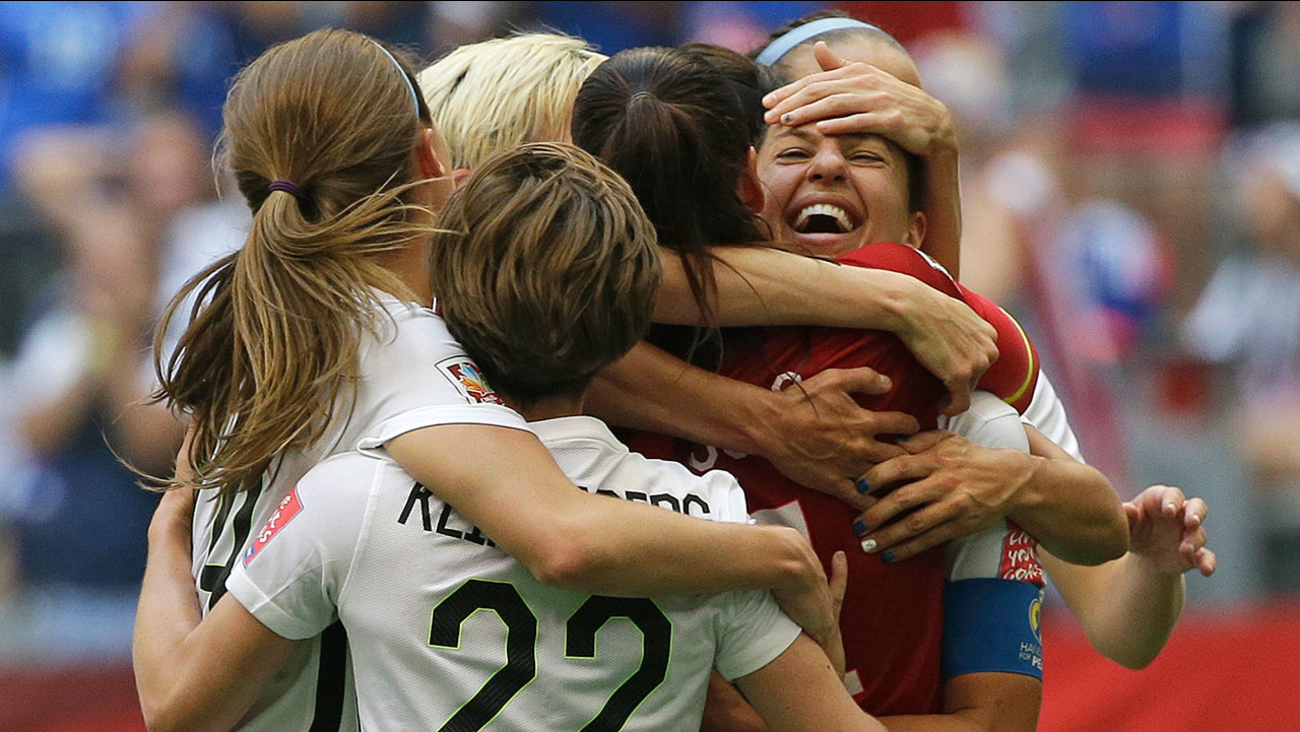 And with it came the Americans' elusive third Women's World Cup title.

Lloyd scored three times as the U.S. burst to a four-goal lead in the first 16 minutes, and the Americans overwhelmed defending champion Japan 5-2 Sunday for their record third championship and first since 1999.

A sellout crowd that included U.S. Vice President Joe Biden roared in approval for Lloyd's hat trick, the first ever in a Women's World Cup final.

"I was just on a mission," Lloyd said. "I was on a mission to help my team win this game."

When it was over, Lloyd collapsed to her knees and pumped her fists. Forward Abby Wambach bear-hugged teary eyed coach Jill Ellis, lifting her off the ground.

Lloyd, voted the Golden Ball as player of the tournament, scored twice in a span of about 135 seconds as the U.S. led 2-0 by the fifth minute.

Lauren Holiday boosted the lead in the 14th and two minutes later Lloyd made it 4-0 with an audacious 54-yard, right-footed shot from midfield that sailed over goalkeeper Ayumi Kaihori.

Japan closed on Yuki Ogimi's goal in the 27th and an own goal by Julie Johnston in the 52nd. Tobin Heath scored two minutes later for the Americans, who had struggled in the World Cup since winning the inaugural tournament in 1991 and then again at the Rose Bowl eight years later.

Christie Rampone, the only holdover from the 1999 team, lifted the trophy with Wambach, the 35-year-old former FIFA Player of the Year who lost her regular starting job with age. Wambach was among the most vocal opponents of FIFA's decision to play the tournament on artificial turf.

With FIFA President Sepp Blatter staying away during a U.S. criminal investigation of soccer officials, the trophy was presented by FIFA Senior Vice President Issa Hayatou of Cameroon, the head of African soccer's governing body.

Hope Solo won the Golden Glove as top goalkeeper of the tournament. She played despite critics who urged the U.S. Soccer Federation to drop her after she initially faced two misdemeanor counts of domestic violence from a June 2014 altercation at her half-sister's house, charges that were dismissed earlier this year.

The title also vindicated the U.S. Soccer Federation for its decision in April 2014 to fire coach Tom Sermanni, who had replaced Pia Sundhage the previous year, and replace him with Ellis, the British-born American who had been an assistant on the coaching staff.

Japan returned eight starters from the 2011 final, when it beat the U.S. on penalty kicks. The Americans, turning their roster over more, started just four of the 11 players who opened that game in Germany.

Lloyd, a 32-year-old midfielder, had come up big before, scoring the winning goals in the 2008 and 2012 Olympic finals.

She put the U.S. ahead in the third minute off a corner kick from Megan Rapinoe, then made it 2-0 when she poked the ball between two defenders and past the Kaihori's outstretched arms.

Lloyd's third goal came when Kaihori came far off her line. The keeper backpedaled and got a hand on it, but it bounced into the goal.

"I called her my beast, and she is just a beast, man," Ellis said. "She's unbelievable. Rock star. Just so happy for her."

"Miss Lloyd she always does this to us. In London she scored 2 goals and today she scored 3 goals. We are embarrassed," said Japan coach Norio Sasaki. "But she is an excellent player and I really respect her and admire her."

Lloyd scored six goals in seven matches during the monthlong tournament, raising her international total to 69.

Holiday added her goal in the 16th minute, volleying a header by a Japanese defender.

Ogimi's goal in the 27th minute was the first Solo had allowed after five straight shutouts. The only other goal scored against her came in the first half of the tournament opener against Australia.

The United States went 540 minutes without conceding a goal, the longest streak in the World Cup since Germany went 679 scoreless minutes from 2003-11.

Japan's victory over the United States four years ago was its first World Cup title and it came just months after the massive earthquake and tsunami that hit Japan, killing more than 20,000 people and touching off the worst nuclear catastrophe since Chernobyl in 1986.

The United States has a 25-1-6 record against Japan, and a 3-1 advantage in World Cup meetings.

"Speechless. Honestly, I'm so proud of this team," an emotional Lloyd said. "This doesn't feel real. It hasn't sunk in. So unbelievably proud of every single person on this team. We just made history."

The tournament was played while FIFA, soccer's international governing body, has been rocked by a widening American corruption probe that alleges bribery and racketeering worth more than $150 million involving high-ranking FIFA officials over a 24-year span.


Related topics:
sportsworld cupu.s. & world
TOP STORIES
Sisters ask Houstonians who may have seen driver hit them to step up
No charges for 4 former officers who shot at unarmed man 21 times
Judge gives insight on the confines most face when setting bonds
Man accused in road rage shooting after Astros game appears in court
How do Houston's homicide numbers stack up with big US cities
1 killed after car crashes into tree in SW Houston, HPD says
Two wet weather systems rain on Texas this week
Show More
Here's how officials determine which migrants will stay in the US
Houston says final goodbye to HPD officer killed while serving warrant
Former Houston police chief Acevedo now at risk of losing Miami job
R. Kelly found guilty on all counts in sex trafficking trial in NYC
Teen intended to 'smoke' cyclists, but plowed into them instead
More TOP STORIES News