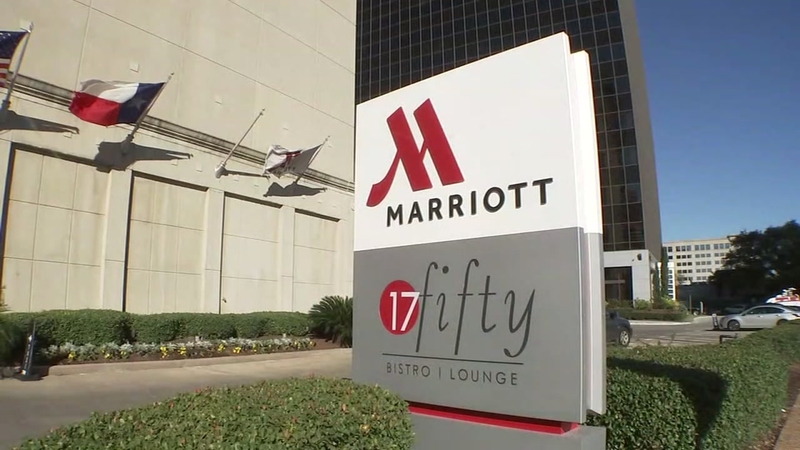 HOUSTON, Texas (KTRK) -- Police are looking for eight suspects who donned masks and stormed a hotel near the Galleria early Tuesday.

Detectives say what happened inside the Houston Marriott West Loop is rare. Most ATM thefts happen at convenience stores. Investigators say those machines usually have less than $500 in them.

Police say that this hotel ATM likely had a large stack of cash, making it appear like this was a well thought out plan.

At 2:30 a.m. as Marriott guests slept in the 12 floors above, masked men walked right through the front door of the 4-star hotel and went to work.

"Seven to 10 men wearing masks had come inside the lobby of the hotel and threatened the security officer and overnight cleaning person," said Lt. Larry Crowson.

Investigators think they knew exactly what they were looking for.

The ATM was not bolted to the floor.

The suspects picked it up and carried it right out the doors they came in.

Waiting for the men were two Dodge Magnum wagons and a Chevy Impala.

The robbers were gone as quickly as they came with a lot of cash.

Investigators searched the surveillance video looking for any clues about the suspects.

None of the men showed a gun and they were careful to cover their faces.

Police are hoping to catch them before they strike again.

Investigators say if you have an ATM in your gas station, grocery store or hotel you need to bolt it down. Officers also suggest pointing a camera directly at the ATM.

Marriott has not commented on the robbery.