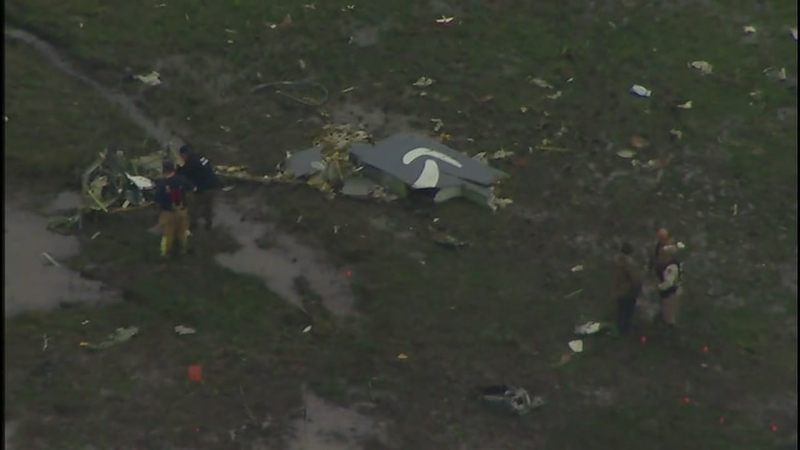 ANAHUAC, Texas (KTRK) -- Human remains have been found by investigators after a Boeing 767 nose-dived into the Trinity Bay in Chambers County Saturday.

According to the FAA, the flight carries an Atlas flight number but was painted in Amazon colors.

"Our thoughts and prayers are with the flight crew, their families and friends along with the entire team at Atlas Air during this terrible tragedy. We appreciate the first responders who worked urgently to provide support," Amazon said in a statement.

Atlas Air also sent the following statement in response to the crash:

This is to confirm that an Atlas Air 767 cargo aircraft Flight No. 3591 operating from Miami to Houston has been involved in an accident this afternoon. We understand the aircraft went down near the city of Anahuac Texas, in the Trinity Bay. We can confirm there were three people on board the aircraft. Those people and their family members are our top priority at this time. Atlas Air is cooperating fully with the FAA and NTSB. We will update as additional information becomes available.
A preliminary report stated that the two-engine Boeing 767 cargo jetliner crashed shortly before 12:45 p.m. Saturday near the City of Anahuac, in the Trinity Bay.

A witness recorded emergency crews searching for the cargo jet.

During a press conference Saturday afternoon, Chambers County Sheriff Brian Hawthorne said they first started receiving 911 reports from witnesses who said to have seen the jet go down into the north end of the bay at Jack's Pocket.

The Federal Aviation Administration issued an Alert Notice (ALNOT) on Atlas Air Flight 3591 after losing radar and radio contact with the Boeing 767 approximately 30 miles southeast of Houston George Bush Intercontinental Airport. The aircraft was flying from Miami to Houston.

"The first thing that I saw the minute I got there is just floating debris," Hawthrone said. "Everything from bed sheets to women's clothing to cardboard boxes."

Hawthorne believed they will be searching the scene for weeks, as the area where the plane landed is best known for duck hunting.

"The problem that everybody is going to have in this recovery process is that the water goes from 5-feet deep to zero and that 0-feet deep is nothing but mud marsh," Hawthorne said.
Sheriff Hawthorne said the DPS dive team will be joining the search for remains and the black box.

Breaking! Twin engine cargo plane down in bay near Anahuac- 3 people-per FAA on board- #abc13 pic.twitter.com/63sRsMFWrM