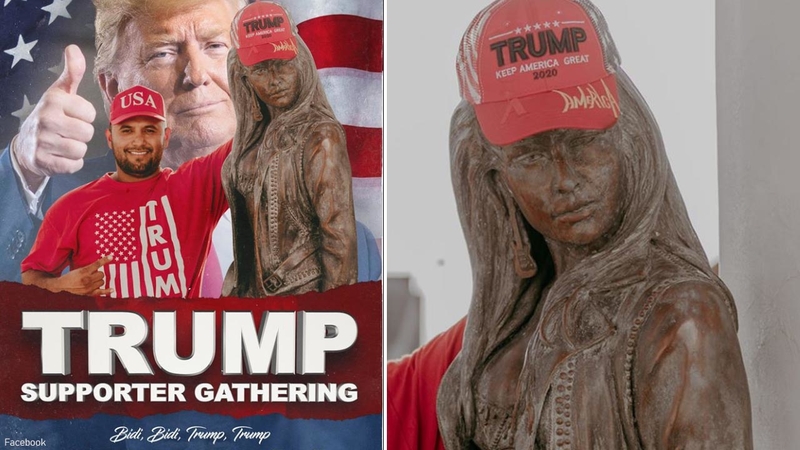 CORPUS CHRISTI, Texas (KTRK) -- The family of late Tejano singer Selena Quintanilla has threatened legal action against a man they say is organizing a rally for President Trump at the memorial honoring her in Corpus Christi.

According to the Caller Times, which obtained the letter from the law firm that represents her family and her estate, the Quintanillas allege her image is being used for profit.


A man named Joe Michael Perez created the event, which is slated for July 11 from 2:30 p.m. - 7 p.m. at the Selena statue on N. Shoreline Boulevard in Corpus Christi.

The event, "Trump supporters gathering at Selena Statue," calls on attendees to bring their own flags and Trump gear. In a photo, Perez poses next to the statue with a Trump hat placed on top.

"The Media has painted their own narrative about the Trump hat that was placed on the Selena Statue. Now it's our turn to come out and paint our own narrative which is that the media has it wrong," said details in a post.

A poster for the event also uses the phrase "Bidi, Bidi, Trump, Trump," a play on the music icon's hit, "Bidi Bidi Bom Bom." The use of the words was something the family said "unlawfully engages in marketing, promotion, and exploitation" of Selena merchandise.

As of this writing, 149 people have said they would attend. Another 421 are interested.

The Caller Times reports that the family's letter about the event is "infringing" and went on to say that the star's name and likeness has never, "at any time," been associated with partisan politics or political organizations.

The letter also alleges that the event makes it appear the Quintanilla family is endorsing Trump.