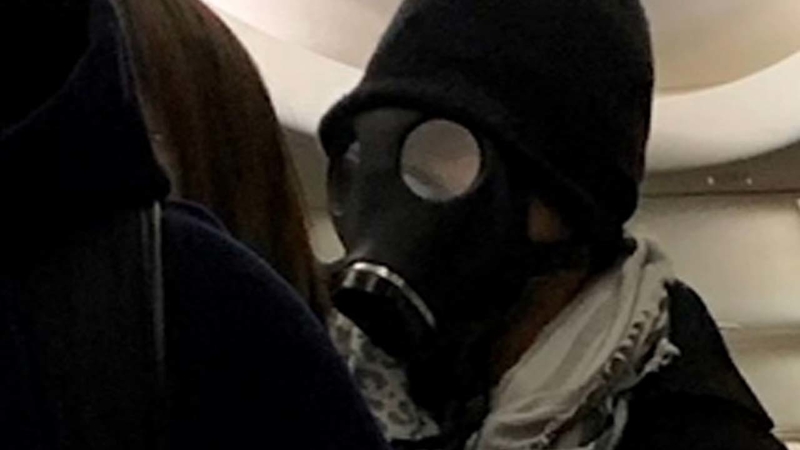 GRAPEVINE, Texas (KTRK) -- A gas mask-wearing man was escorted off a commercial flight Thursday after causing a panic, according to a passenger on board.

"Just FYI flight 2212 to Houston was delayed an hour because you let this guy on the plane wearing a gas mask," Joseph Say wrote on Twitter. "This then panicked people on the plane and we had to wait for him to be escorted off."

@AmericanAir , Just FYI flight 2212 to Houston was delayed an hour because you let this guy on the plane wearing a gas mask. This then panicked people on the plane and we had to wait for him to be escorted off. @abc13houston @KHOU @HoustonChron @KPRC2 @FOX26Houston #trainbetter pic.twitter.com/mZkWea606d

In an interview with ABC13, Say described the bizarre incident that took place before the scheduled take-off from Dallas-Fort Worth International Airport.

According to Say, passengers became worried after a man boarded the American Airlines flight Thursday wearing a gas mask and a black beanie.

"I had a seat in the back. I was sitting there. I was talking to the lady next to me. We heard a little bit of commotion," Say recalled. "I looked up and saw a guy coming onto the plane wearing a full gas mask, which was kind of odd. He didn't have a filter, which I thought was more strange."

WATCH: Witness walks ABC13's Steve Campion through exactly what led up to the masked passenger being escorted off the plane
EMBED More News Videos

Witness Joseph Say said the woman sitting next to the masked passenger said he was wearing the mask to make a statement.

Say continued, "Immediately, people start talking in the back of the plane. They were worried. Most people wanted him off the plane."

Say added the incident delayed the flight. He said people wanted to know why he had the gas mask on.

When asked by a flight attendant to remove the mask, Say said the man refused. He eventually walked off the plane after the crew called security.

"What we heard from the lady sitting next to him was he said he wanted to make a statement. I don't know what the statement was. I'm not sure what his goals were. To me, it seemed inconsistent," Say said. "You couldn't see his face. You couldn't identify any features on him. People were worried he had sneaked something on-board and that he had the mask for his own safety."

It wasn't known why he was wearing the facial gear or if he was charged with a crime.

Flight 2212 was scheduled to leave DFW International Airport just before 7 p.m. Thursday, but took off 50 minutes late. It arrived at 9:07 p.m. at Bush Intercontinental Airport.

UPDATE - @AmericanAir tells us "the passenger was rebooked on the next flight to Houston, and flew without the mask on yesterday evening." Still no explanation for why he insisted on wearing the gas mask. #abc13 #hounews https://t.co/ILApZoMfQz

On Friday, American Airlines told ABC13, "The passenger was rebooked on the next flight to Houston, and flew without the mask on yesterday evening."

The airline also added the masked passenger flew into DFW from Los Angeles.

Here was American Airlines' original response to a question about the incident:

Thanks for your tweet. Our team is aware of this and worked with local officials. Let us know if you need any assistance with your trip.

RELATED: Houston flight to Amsterdam diverted due to disruptive passenger
Report a correction or typo
Related topics:
societydallasair travelbush intercontinental airportamerican airlinesflight divertedtwitter
Copyright © 2021 KTRK-TV. All Rights Reserved.
TOP STORIES
Free college proposal likely to be dropped from Biden's spending plan
Big warm up ahead but another cool front in the forecast
Federal investigators at site of MD-87 plane crash in Waller Co.
White House details plan to roll out COVID vaccines for younger kids
Body found in fire's rubble had gunshot wounds, HFD says
5K run to be held in murdered woman's honor
How residents in this Harris County neighborhood became numb to crime
Show More
Nikolas Cruz pleaded guilty to murder in 2018 Parkland massacre
US expected to authorize Moderna, J&J boosters as soon as today
Houston executive 1 of 21 on board jet when it crashed in field
Americans arrested for trying to board flight in Switzerland
Loved ones remember mom of 3 killed during home invasion
More TOP STORIES News